The fourteenth match of VIVO IPL 2021 will be played on the 21st of April at M.A. Chidambaram Stadium (Chepauk), Chennai between Punjab Kings and Sunrisers Hyderabad.

Punjab Kings have lost two back-to-back matches and are struggling to make a comeback. In the last game against Delhi Capitals, Punjab Kings failed to defend a massive total, courtesy of its bowlers. After losing the toss, Punjab Kings were invited to bat first. With the help of excellent innings from their skipper KL Rahul and his opening partner Mayank Agarwal, Punjab Kings posted a big total of 195 runs on the board.

KL Rahul scored 61 runs off 51 balls while Mayank Agarwal scored 69 runs off 36 deliveries. All-rounder Deepak Hooda played a cameo of 22 runs from 13 balls. While defending this total, the bowlers of the Punjab Kings were awestruck as they struggled to pick the wickets of the opposition at regular intervals.

Delhi Capitals were able to chase this big total with 10 balls remaining. The only notable bowling performance was from Jhye Richardson who bagged two wickets in the game. Arshdeep Singh and Riley Meredith also picked a wicket each. Punjab Kings must look into its bowling department and make the necessary changes. Spinner Ravi Bishnoi can get a chance in playing XI as he was pretty successful in the last edition of VIVO IPL.

In response to it, the bowlers of the Sunrisers performed pretty well. Vijay Shankar and Mujeeb ur Rahman picked two wickets each while Khaleel Ahmad got one wicket to his name. With the help of these bowling performances, Sunrisers Hyderabad were able to restrict the Mumbai Indians at a total of 150 runs.

While chasing this below-par total, their opening duo helped them with a flying start once again. Skipper David Warner scored 36 runs off 34 deliveries while Jonny Bairstow scored 43 runs off 22 deliveries. As soon as the openers got out, the middle-order of Sunrisers Hyderabad collapsed and the whole team was sent to the pavilion at a score of mere 137 runs.

Only all-rounder Vijay Shankar crossed a 2-digit score except for the openers and scored 28 runs off 25 deliveries before succumbing. The team is struggling to get the right balance and making unexpected changes in the playing XI. The team management should resolve this issue before it’s too late for them in the season.

Out of a total of 16 clashes between Sunrisers Hyderabad and Punjab Kings, Punjab won just 5 games while Hyderabad won 11 games.

The temperature will lie between 27-34 degree Celsius during the match hours. The chances of precipitation are pretty low. The humidity will be around 65%.

The pitch at Chepauk is assisting both batsmen and bowlers and a good contest between bat and ball is expected once again in this match. Spinners are getting decent help towards the latter half of the match.

The injury of Kane Williamson is still uncertain and is likely to not play in this game.

KL Rahul is in great touch with the bat. He scored 61 runs in the last game against Delhi Capitals apart from 91 runs in the first game. He is a safe multiplier pick for this match.

Mayank Agarwal is the attacking opener of Punjab Kings. He gained his lost form in the previous game and scored 69 runs off just 36 deliveries, including 4 sixes.

Arshdeep Singh has proved to be a consistent wicket-taker for Punjab Kings in recent times and is likely to continue his form in this game as well.

David Warner is also looking in decent touch with the bat. He scored 36 runs in the last game before getting run-out in an unlucky manner.

Rashid Khan is a promising and consistent wicket-taker for Sunrisers Hyderabad. He is expected to pick multiple wickets and can be considered a multiplier choice.

Jonny Bairstow is in excellent form with the bat and is likely to continue his momentum in this game as well. 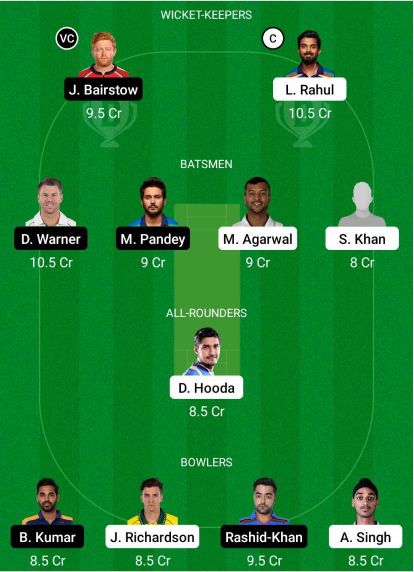 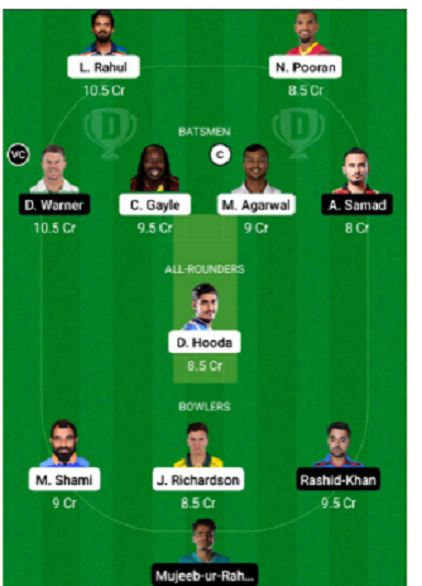 The suggested combination is 2-4-1-4. Arshdeep Singh can be picked for the second team by replacing Mohammad Shami. David Warner can be tried as captain in one of the teams.

Punjab Kings are the probable winners.