The fifteenth league match of VIVO Indian Premier League (IPL) 2021 is set to be played on 21st April between Kolkata Knight Riders and Chennai Super Kings at Wankhede Stadium, Mumbai.

The fifteenth match of VIVO IPL 2021 and the second match of the double-header on Wednesday will be played between Kolkata Knight Riders (KKR) and Chennai Super Kings (CSK). The match is going to be crucial concerning the points table as 2 important points are at stake and both the teams will try to get those points to their name.

Kolkata Knight Riders have played three games so far out of which they have won only one while lost the other two games, including two back-to-back losses and must be eyeing to return on the winning track. In their last game against Royal Challengers Bangalore (RCB), Kolkata Knight Riders were called to bowl after losing the toss.

Spinner Varun Chakravarthy struck early and picked 2 wickets, including the important wicket of skipper Virat Kohli. As soon as Glenn Maxwell came on the pitch, the bowlers surrendered and were unable to pick his wicket and also proved to be expensive. The star player and Mr. 360, AB de Villiers also joined the party and thrashed the bowlers and helped the team to a massive total of 204 runs.

Apart from Varun Chakravarthy, Pat Cummins and Prasidh Krishna got one wicket each to their name. While chasing this mammoth total, none of the batsmen stayed on the crease for long and kept throwing their wickets in the pressure of the ever-increasing required run-rate which resulted in a defeat by 38 runs for them.

The squad of Kolkata Knight Riders has all the weapons to win the game but the major concern for them is their out of form players. The team management will try to figure out things and get them sorted as the crucial phase of the tournament is passing by.

Talking about Chennai Super Kings, they have made a pretty good comeback after the loss in the first game and are positioned at second place in the points table with two wins out of three games they have played so far. After losing the toss in their last game against Rajasthan Royals, they were invited to bat first.

While defending this total, the bowlers did an outstanding job and restricted the opponents to 143 runs, and registered a convincing victory by 45 runs. The spinner Moeen Ali weaved the web for batsmen and pick 3 wickets to become the Player of the Match. Ravindra Jadeja and Sam Curran picked 2 wickets each while Shardul Thakur and Dwayne Bravo also got one wicket each to their names. Chennai Super Kings must be looking for another victory to complete the hat-trick of wins.

Out of the total of 23 encounters in VIVO IPL between the two teams, Chennai won 14 of them and Kolkata won 8 games while one game went resultless.

The temperature will lie between 27-33 degree Celsius with low chances of precipitation. The humidity will be around 63%.

The dew factor comes into play at night time at Wankhede thus batsmen will be a benefit during the latter half of the game. The pitch is overall good for batting and a decent amount of runs are expected to be scored in this game.

The chasing team has won 51.3% of the matches at Wankhede.

There are no injury issues in the Kolkata Knight Riders camp. Pacer Lungi Ngidi has started training for the tournament and is likely to be available for selection.

Nitish Rana is in good form with the bat and is consistently scoring runs in this season of VIVO IPL. He has scored 155 runs in 3 innings till now at an average of 51.66. He is a safe multiplier pick for this game.

Rahul Tripathi is also looking in decent touch with the bat and has scored 83 runs in the 3 innings he played by far, including a half-century. He can be a trump pick in the team.

Andre Russell is a crucial pick as he contributes with both bat and ball. He has scored 45 runs and picked 6 wickets by far in this season of VIVO IPL.

Sam Curran is in positive touch with both bat and ball. He has scored 52 runs and picked 3 wickets in the three games he has played so far.

Suresh Raina has scored 80 runs in the 3 innings he has played by far and can be destructive on his days. He also holds a great record against Kolkata wherein he has scored 818 runs at an average of 45.44.

Moeen Ali is also enjoying his great form with both bat and ball and has scored 108 runs as well as picked 4 wickets in this tournament by far. 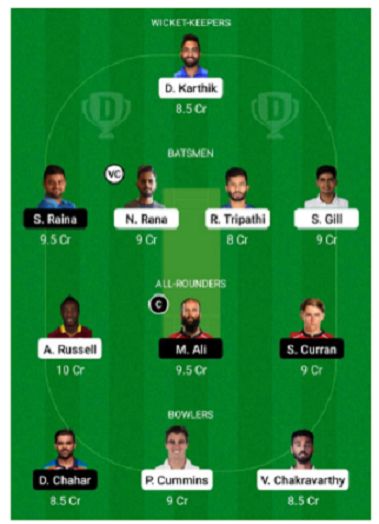 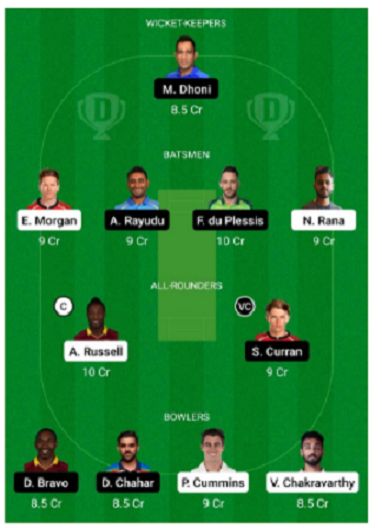 The recommended team combination is 1-4-2-4. Faf du Plessis can be picked in the first team by replacing one of the all-rounders. Rahul Tripathi can be considered for vice-captaincy pick in this game.