KKR vs MI Dream11 Prediction: The 5th match of the 14th edition of the Indian Premier League (IPL 2021) will be played between Kolkata Knight Riders and Mumbai Indians at M. A. Chidambaram Stadium, Chennai on Tuesday, April 12, 2021.

Mumbai Indians will take on Kolkata Knight Riders in the 5th match of the 14th edition of the Indian Premier League 2021 at the MA Chidambaram Stadium.

Mumbai Indians have lost their first match of the tournament against Royal Challengers Bangalore by 2 wickets. Explosive batsman Chris Lynn played his debut game for Mumbai Indians and made the most of it by smashing 49 from 35 deliveries at a strike rate of 140. Lynn slammed seven boundaries, including three sixes, before Washington Sundar dismissed him.

Apart from Lynn, Surya Kumar Yadav and Ishan Kishan made valuable contributions with 31 and 28 runs, respectively. In another development, Quinton de Kock has completed his quarantine and will be available for the next match. However, it is yet to be seen how Mumbai will adjust Chris Lynn in the Playing XI.

Kolkata Knight Riders, on the other hand have made a brilliant start to their campaign as they won their first match against SunRisers Hyderabad.

Nitish Rana and Shubman Gill gave their side a flying start. The duo added 53 runs for the opening wicket before SRH star Rashid Khan provided the breakthrough by dismissing Gill on 15.

However, Rana kept on scoring boundaries and formed another crucial stand with Rahul Tripathi. The pair put together 93 runs for the second wicket. Rana slammed a half-century. He scored 80 off 56 balls, packed with nine fours and four sixes. On the other hand, Tripathi, too, shined with the willow, scoring 53 off 29 balls.

Later, former skipper Dinesh Karthik gave KKR a tremendous finish after smashing unbeaten 22 runs from just nine deliveries to take his side to 187/6.

The pitch at Chepauk should be a good one to bat on, with some spin available off the surface for the bowlers. With humid conditions on offer, either side will prefer to chase at the venue upon winning the toss. Anything above 180 is a decent total at Chepauk, with conditions not likely to change much during this match.

When it comes to the weather in Chennai, the first thing that comes to the mind is humidity. It will be around 75% during this match as well. There is no rain in the forecast while it will remain cloudy throughout the action in the middle. The temperature will hover around 30-31 degrees Celsius.

Based on the last 5 matches played at M. A. Chidambaram Stadium, Chennai — 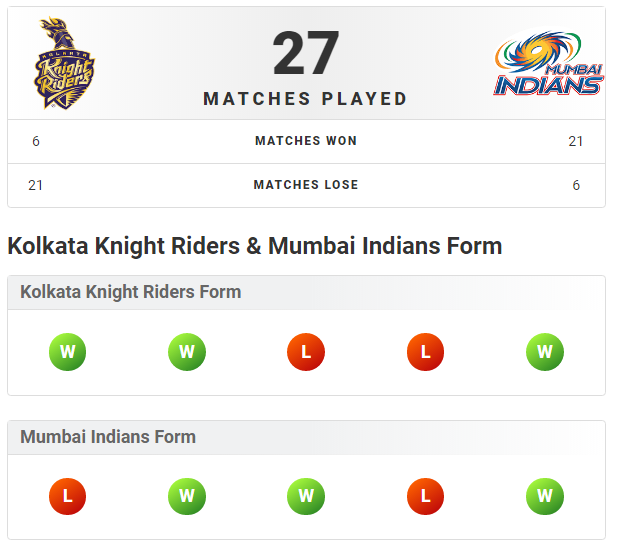 Top 5 Picks For KKR vs MI

Suryakumar Yadav failed to score big in the last IPL game with only 31 runs under his belt. But he’s been in good form and he is expected to score big this time. He can be a good pick for your fantasy team.

He smashed 28 runs in just 19 balls with a strike rate of 147.36. He is in brilliant form and many more such Knocks are expected from him.

He has returned to his explosive form. He smashed 22 runs in just 9 balls with a strike rate of 244.44 in his previous game and considering his red hot form, picking him as one of your wicket keepers will only boost your chances in fantasy teams.

He opened for Kolkata Knight Riders and smashed 80 runs off just 56 balls with the help of 9 fours and 4 sixes. He is in great form and is expected to carry on the same momentum.

The Bangladesh All-rounder proved his worth in the very first over he threw in his very first match of the season. He took a wicket on the first ball of his first over and conceded only 1 run in that over. 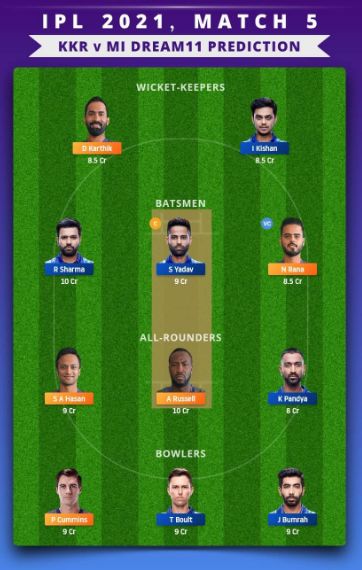 Kolkata Knight Riders is expected to win this match.

Disclaimer: This team is based on the understanding, analysis, and instinct of the author. While selecting your team for the fantasy game please consider the points mentioned and make your own decision at the time of making your team.

RR vs PBKS Dream11 Prediction: 3 Players Battles To Watch Out For In Rajasthan Royals vs Punjab Kings IPL 2021