Chennai Super Kings are on a 4-match winning streak after losing the first game and are at the top of the points table. In their last game against Royal Challengers Bangalore (RCB), after winning the toss, skipper MS Dhoni decided to bat first. In response to this, the openers gave them a good start once again, and Faf du Plessis smashed a half-century at the top.

Ruturaj Gaikwad scored 33 runs off 25 deliveries while Suresh Raina also scored 24 runs off 28 deliveries. Towards the end of the inning, Ravindra Jadeja smashed a game-changing knock of 62 runs off just 28 deliveries, including a devastating 37 runs in the last over off Harshal Patel.

While defending this total, Ravindra Jadeja picked 3 crucial wickets and broke the backbone of the opponent’s batting lineup, and single-handedly converted the game in his team’s favor. Imran Tahir also picked 2 wickets while Shardul Thakur and Sam Curran picked a wicket each and restricted the opponent to a mere 122 runs to register a convincing victory by 69 runs.

The team is in great form and is likely to carry its momentum in the next game as well.

Talking about Sunrisers Hyderabad, the team is positioned at 8th place on the points table with only one victory out of 5 games. In their last game against Delhi Capitals (DC), the team lost the game in the super-over on the last ball. After losing the toss, the team was called to bowl first, in response to which the bowlers did a decent job and restricted the opposition to a total of 159 runs.

Siddharth Kaul picked 2 wickets while Rashid Khan bagged a vital wicket to his name. While chasing this total, David Warner once again got run out in an unfortunate manner. Jonny Bairstow scored 38 runs off 18 deliveries while Kane Williamson scored 66 runs off 51 deliveries and remained not out but, still, was unable to help his side cross the line and the score ended at a tie which forced the game into the first super over of the season where Sunrisers Hyderabad lost the game in a close encounter.

The team must look into its middle-order as they have lost a number of games closely due to the failure of middle-order.

Out of a total of 14 games between the two teams, Chennai has won 10 games while Hyderabad has won only 4 games so far.

The temperature will hover around 40 degrees Celsius. There are no chances of precipitation and humidity will be around 12%.

The pitch is helpful for batters and also helps the spinners as the ball becomes older, as it offers grip to the spinners towards the later half.

The average first inning score at this stadium is 156 runs.

The chasing teams have won 54% of games at this venue.

Bhuvneshwar Kumar is reported to be injured and there is suspicion over his availability in this match as well.

Moeen Ali is likely to get back into the team as reported during a match interview by Robin Uthappa.

Faf du Plessis is on a golden run with the bat and has scored 214 runs in 5 innings so far at an average of 71.33 and will be a safe multiplier pick for this match as well.

Ruturaj Gayakwad is looking in positive touch from the past few innings and has scored a total of 117 runs in the tournament so far. He will be eyeing to provide his team with another healthy start at the top.

Ravindra Jadeja showed his all-round abilities in the previous game against Royal Challengers Bangalore wherein he stacked a terrific half-century with the bat and then grabbed 3 wickets with the ball, he has scored 102 runs and has also picked 5 wickets in the tournament so far.

Jonny Bairstow has scored 211 runs in 5 innings so far at an average of 52.75 and is the current leading run-scorer for his team. He will be a valuable asset for the side as he can also fetch a few handy points with the gloves.

Kane Williamson has scored 82 runs in 2 innings and is still unbeaten this season. He will be hoping to continue this momentum and help his side into a stronger position in this game.

Rashid Khan has picked 6 wickets in 5 matches so far in this season and can prove to be a trump pick with the type of consistency he brings into the team. 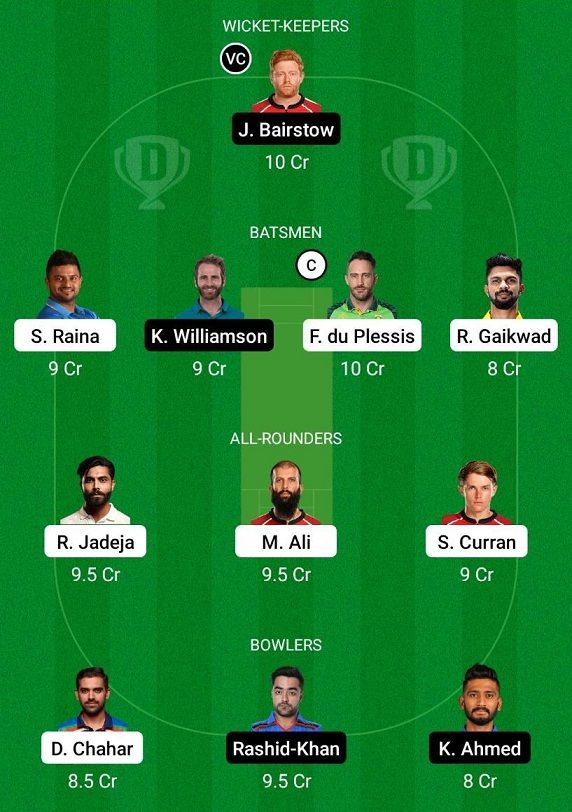 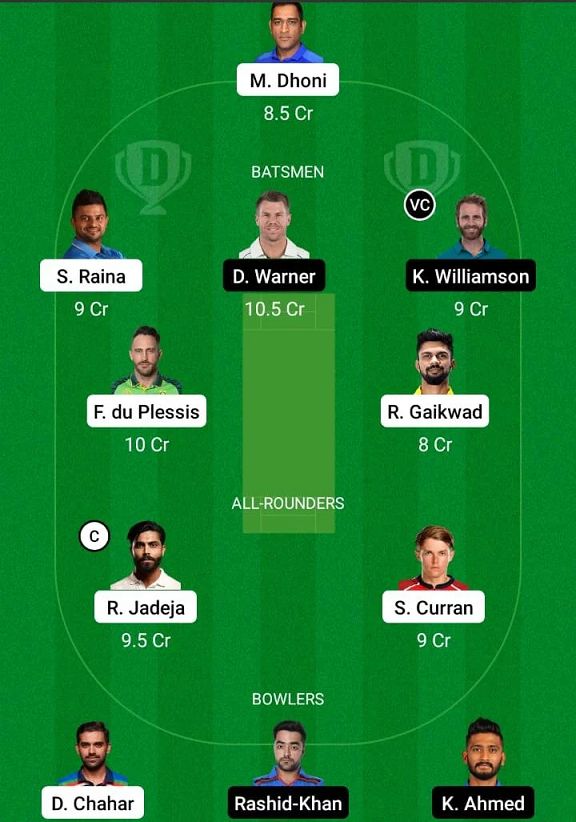