Aaron Finch and his men will face a huge challenge from the defending ICC World T20 champions.

West Indies will host Australia in a 5-match T20I series, which will be followed by 3 ODIs. Despite playing a full-strength eleven, they lost the T20I series against South Africa by a 3-2 margin. There is no doubt about their bowling capabilities, but batters have struggled to keep up the run rate.

Meanwhile, with some of their key players backing away from the tour of West Indies and Bangladesh, Cricket Australia has named a slightly inexperienced squad for both the tours. It will be an excellent opportunity for some players to cement their spot by performing well. Aaron Finch will lead the side.

The track here at Daren Sammy National Cricket Stadium is conducive for the seam bowlers. Having said that, the batters should play initial overs without throwing their wickets. It’s quite difficult to score runs in the middle overs. Anything close to 170 is a competitive score on this venue.

Evin Lewis was the leading run-scorer for West Indies in the recently concluded series against South Africa. He mustered 178 runs in 5 matches at an average of 35.6, which includes 2 half-centuries.

Aaron Finch is the most experienced player in the current Australia squad. The Australian skipper has accumulated 2346 runs in 71 T20Is at an average of 38.45, with the highest score of 172.

Andre Russell wasn’t up to the mark with the bat in the T20I series against South Africa, since he managed to score only 62 runs in 5 matches. He will be expecting to have a better series against the Kangaroos.

Ashton Agar bowls at a flatter trajectory and he has been successful in recent times for Australia. He has scalped 8 wickets in the last 5 T20I matches, with the best figures of 6 for 30.

Obed McCoy was the find for the West Indies in the series against South Africa, where he ended up as the second-highest wicket-taker with 9 scalps in 5 matches, at an economy of 7.05.

Mitchell Starc is one of Australia’s premium bowlers in all forms of the game. He can read the batter’s mind and knows exactly what line and length to bowl to them. The New South Wales left-arm quick has scalped 47 wickets in his T20I career.

Matthew Wade had a reasonable T20I series against New Zealand. He managed to score 99 runs in 5 matches, with the highest score of 44. He is a decent pick for your fantasy teams.

WI vs AUS Must Picks for Dream11 Fantasy Cricket: 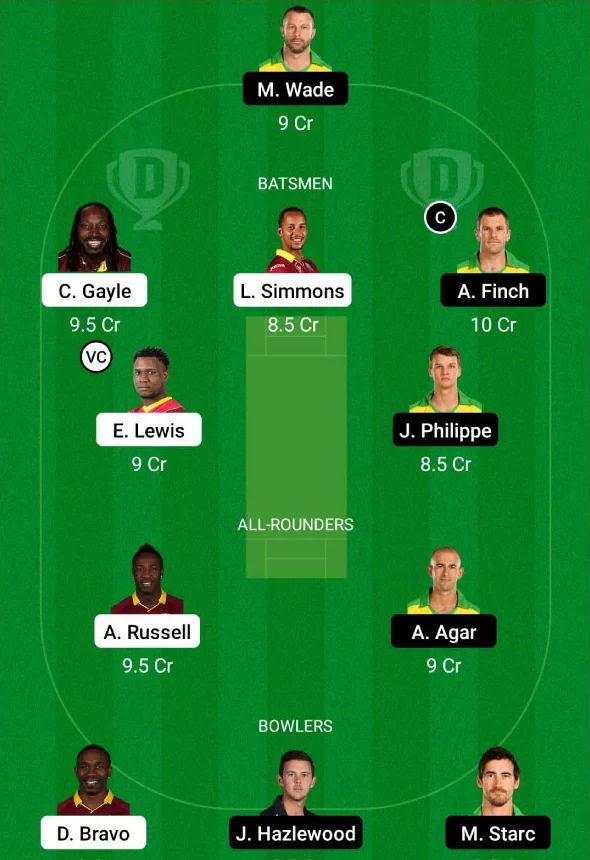 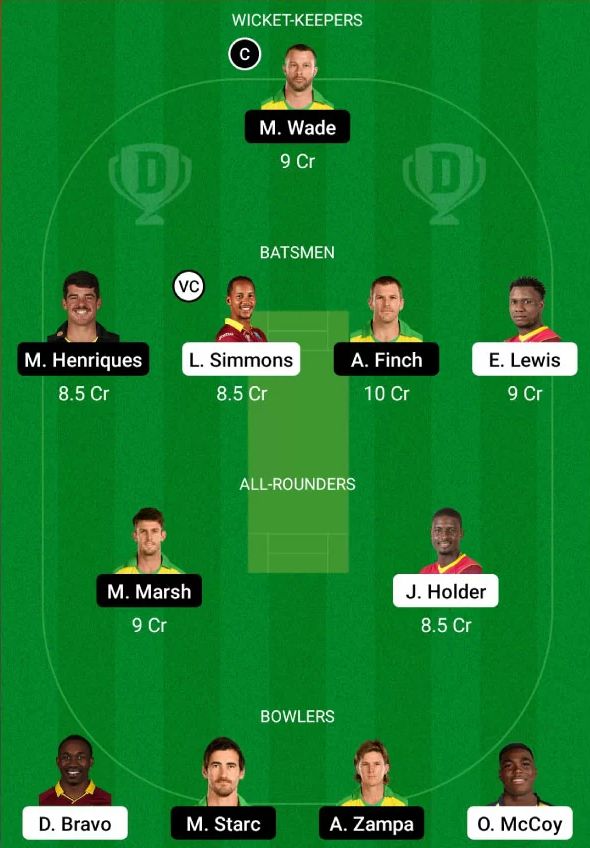 Lendl Simmons scored 72 runs in the T20I series against South Africa at a strike rate of 116.12. He is a risky captaincy pick for your fantasy teams.

Mitchell Starc is a wicket-taking bowler who likes to attack the stumps. You can take a risk and pick him as your fantasy team skipper.

Alex Carey will bat in the middle order and there is not much scope for him to fetch more points. Hence, it’s better to avoid him while making your fantasy teams.