Nitish Rana Celebration: The two-time IPL winners Kolkata Knight Riders (KKR) are currently taking on the Sunrisers Hyderabad (SRH) at the MA Chidambaram Stadium in Chennai. In the third match of Indian Premier League (IPL) 2021 season, Sunrisers Hyderabad have won the toss and opted to bowl first. However, KKR opener Nitish Rana has set the stage on fire with some remarkable striking in the ongoing SRH vs KKR encounter.

Related: Why is Kane Williamson Not Playing Today?

KKR opener Nitish Rana looked in a stunning touch in the ongoing match against Hyderabad having notched up a remarkable half-century off just 37 balls. Rana got to his fifty with an incredible six in the backward square-leg region and he was also seen celebrating the milestone with a unique celebration. After getting to his fifty, Rana was seen pointing out to the ring on his finger and it seemed like he was trying to make a unique symbol. 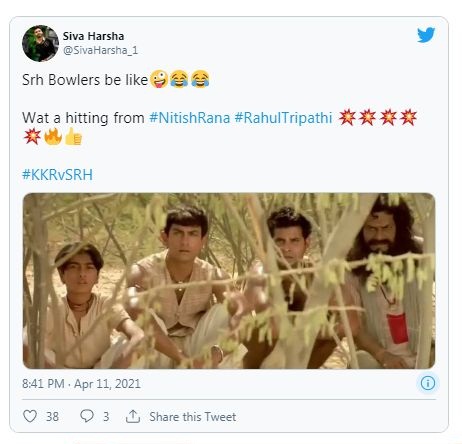 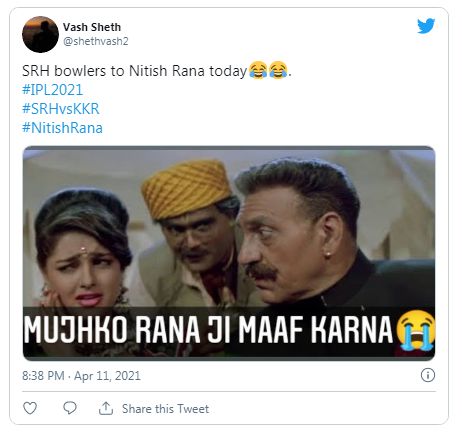 Rana and Shubman Gill provided Kolkata with a brilliant start by smashing a total of 50 runs in the first six overs of the powerplay. After Gill’s wicket, the duo of Rana and Rahul Tripathi composed a wonderful partnership of 93 runs for the second wicket.

In his opening match of IPL 2021, Rana cracked a sensational knock of 80 runs off just 56 balls that included 9 fours and 4 sixes. However, Sunrisers Hyderabad off-spinner Mohammad Nabi bowled a game-changing 18th over where he dismissed Rana and Eoin Morgan off consecutive balls. But towards the end, former KKR captain Dinesh Karthik smashed a quick-fire cameo of 22 runs off only 9 balls to help his team reach 187 for 6 in their 20 overs. For Hyderabad, Rashid Khan bowled amazingly well picking two wickets for just 24 runs and his Afghan teammate Nabi also ended with figures of 2 for 32.

SRH vs KKR: Why is Kane Williamson Not Playing Today?