India vs England 1st T20I: Wasim Jaffer may have long retired from cricket but he is constantly bringing out his A-Game on social media these days.
Jaffer made yet another witty comment, this time on Michael Vaughan’s unwarranted sly dig, aimed at the Indian cricket team, and you can say, the former England captain deserved it.

It so happened when India were restricted to a meagre total of 124/7 in the 1st T20, that, Michael Vaughn tweeted, “Mumbai Indians are a better team than Team India.”

Though Mumbai Indians are the most successful team in the IPL having won the title record five times, including the win in 2020, still, that tweet was totally unjust. Comparing an international team with a domestic T20 League Team was an imbecile thing to do.

Vaughan received the flak as soon as he tweeted, but Wasim Jaffer’s reply was perfect, a superb example that the humour can be simple and yet good, and enough to shut him down.
Jaffer simply pointed out the fact that Mumbai Indians are allowed to play four overseas players in every game. 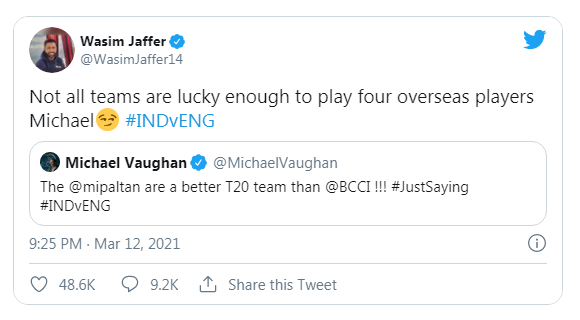 Michael Vaughan’s tweet may have hurt the Indian cricket fans and was unmerited, but it was not surprising or shocking, by any stretch of the imagination. The 2005 Ashes-winning captain has made a bad habit of taking constant digs towards the Indian cricket team. But there’s a reason for that. By posting tweets about Indian cricket, he gets into the limelight and earns a lot more traction than when he writes on something else.
Vaughan also questioned the pitches way more than he should have during the test series England lost comprehensively.

Putting aside Vaughan’s tweet, there’s no doubt that India were caught off-guard by the English team in the 1st T20. Eoin Morgan had a better plan, it seemed, while Virat Kohli’s surprisingly bad run of form isn’t helping the team either. India needs answers ahead of the 2nd T20I match which will be played at the Narendra Modi Stadium on Sunday evening.