IND vs ENG: Even when India racked up a daunting total of 185 runs in the 4th T20I, there was a feeling that the hosts may have fallen short by 15-20 runs. Winning the toss and chasing the target has been the norm in this India vs England T20I series. Eoin Morgan didn’t deviate away from the trend as he opted to field first.

In the end, Indian fans heaved a huge sigh of relief. However the game panned out, it’s the final result that matters and India are still alive in the series and will contest the decider against England at the Narendra Modi Stadium on Saturday evening.
That said, beyond the result, there was a feeling of unjust amongst Indian cricket fans. As there were some controversial decisions and India seemed to have come to the receiving end every time.

The decision involving Rishabh Pant was not the only final verdict that left Indian team management baffled. Suryakumar Yadav was given out for a catch that was far from clean. In fact, it’s clear that Dawid Malan may not have his fingers underneath the ball while attempting the catch. 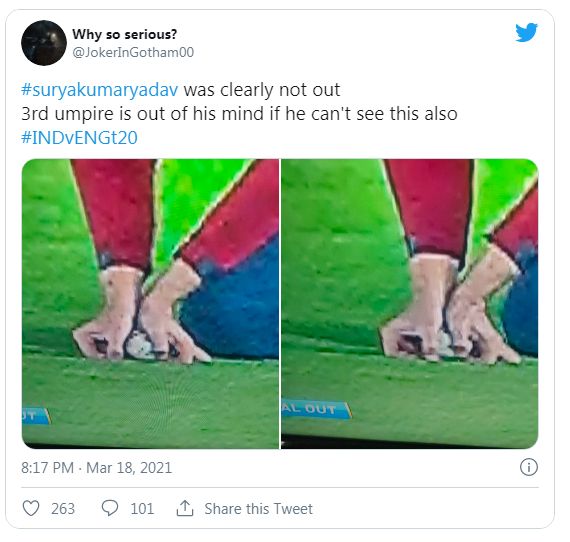 ENG vs IND 5th T20I: All Set For The Decider

It was too close for comfort for the Indian fans in the end, but India levelled the series after beating England by 8 runs in the 4th T20I. The fifth and final match will be played on Saturday evening.
One more good thing to come out of the 4th T20I match is that India debunked the toss theory. It can’t be held accountable for the team losing the game.