South Africa Playing 11: With South Africa bouncing back in the 2nd ODI and securing a 17 runs versus Pakistan, it all goes down to the wire in the the 3rd and final ODI. The hosts showed clear intent in the first innings as they struck 341 runs for the fall of six wickets in 50 overs. Quinton de Kock scored a valuable 80, while, the skipper Temba Bavuma fell eight runs short of his hundred. But it was man-in-form Rassie van der Dussen who showed his class yet again and smashed 60 from just 37 deliveries. David Miller also bagged some boundaries and got to 50* from 27 deliveries.

Though the South Africans kept picking up wickets at regular intervals in the second half, it was Pakistan’s opener Fakhar Zaman who went down with a fight and scored a sublime knock of 193 from 155. So far, both ODIs have turned out to be entertaining affairs, but the final match could be a worry for the hosts as they will be missing out on a few first teamers, due to them traveling to India for the IPL 2021.

The likes of Kagiso Rabada, Anrich Nortje, Lungi Ngidi, David Miller and Quinton de Kock are all ruled out, which makes winning the final ODI all the more challenging. Nevertheless, the players on the bench will now get an opportunity to shine in national colors, and it could eventually come of big use. That being said, it would be hard to tell what the ideal combination for South Africa may look like. 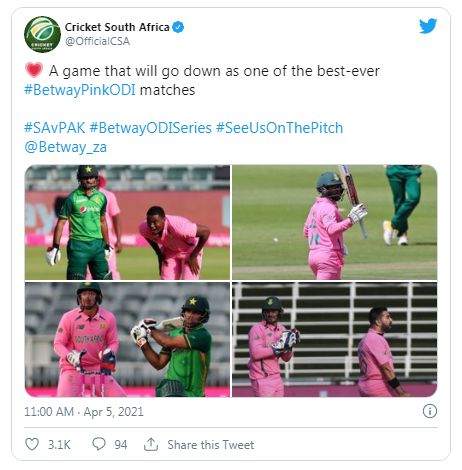 The 3rd and final ODI between South Africa and Pakistan will be contested at the SuperSport Park Cricket Stadium. The match begins at 1:30 PM (IST), and the ball by ball coverage will be done by Star Sports.