Royal Challengers Bangalore (RCB) vs Kolkata Knight Riders (KKR) Dream11 Prediction, Fantasy Cricket Tips, Playing XI, Pitch Report, Dream11 Team, Injury Update of VIVO IPL 2021. Royal Challengers Bangalore will be getting on the field on Sunday to hit the hat-trick of wins to their tally while Kolkata Knight Riders will be eyeing for their second win.

The tenth match of VIVO IPL 2021 will be played on the 18th of April at M.A. Chidambaram Stadium (Chepauk), Chennai between Royal Challengers Bangalore (RCB) and Kolkata Knight Riders (KKR).

The game is scheduled to start at 03:30 PM IST and the live streaming can be seen on Star Sports network as well as Hotstar while the live updates and scores can be tracked on the cricknewz.com website.

The VIVO IPL 2021 will witness its first double-header on Sunday. The daytime match will be played between Royal Challengers Bangalore (RCB) and Kolkata Knight Riders (KKR) at M.A. Chidambaram Stadium. Both the teams have played two matches each by far in this edition VIVO IPL. Royal Challengers Bangalore is comfortably sitting at the top of the points table by winning both the games they have played so far. On the other hand, Kolkata Knight Riders lost to Mumbai Indians in the second game after winning the first game against Sunrisers Hyderabad.

Royal Challengers Bangalore is looking confident after back-to-back victories and will try to maintain its winning streak. In the last game against Sunrisers Hyderabad (SRH), Royal Challengers Bangalore successfully defended a low total of 149 runs with the help of the clinical performances of the bowlers and a resolved inning from their batting firepower Glenn Maxwell.

After losing the toss, Royal Challengers Bangalore were invited to bat first. In answer to that, the team lost its opener and the comeback man Devdutt Padikkal cheaply. Skipper Virat Kohli played a decent inning of 33 runs off 29 deliveries but once again was unable to capitalize on his good start.

All-rounder Shahbaz Ahmad failed to impress with the bat in the middle-order but picked 3 important wickets and changed the course of the game. The star player Glenn Maxwell, once again, played a terrific knock of 59 runs off 41 deliveries and led the team to a respectable total. He also became Player of the Match for his outstanding performance.

While defending the total, the bowlers of Royal Challengers Bangalore performed brilliantly and led the team to victory in a nail-biting contest. Spinner Shahbaz Ahmad picked 3 wickets while pacers Mohammad Siraj and Harshal Patel picked 2 wickets each. Kyle Jamieson also added a wicket to his name. The team management is unlikely to make any changes to this winning combination until forced due to an injury at the last moment.

Talking about Kolkata Knight Riders, this team started its VIVO IPL 2021 campaign on a positive note by defeating Sunrisers Hyderabad. In the second game against Mumbai Indians, the Kolkata Knight Riders fell flat in chasing a below-par target as the finishers failed to convert a run-a-ball match in their favour.

After winning the toss, captain Eoin Morgan decided to bowl first and the bowlers of Kolkata Knight Riders did not disappoint the captain and restricted the strong batting line up of Mumbai Indians to a total of 152 which included a stunning fifer from the star all-rounder Andre Russell in the two overs he bowled towards the end.

Pat Cummins picked 2 wickets while Shakib Al Hasan, Prasidh Krishna, and Varun Chakravarthy picked one wicket each. While chasing 153 runs, Kolkata got off to a great start, opener Nitish Rana continued his good form and smashed 57 runs off 47 deliveries. He got good support from the other end where his opening partner Shubman Gill contributed 33 runs off 24 deliveries.

As soon as the openers got out, the middle-order of Kolkata collapsed and no other batsmen reached even a two-digit score which resulted in an adherent loss for them. The lack of intent with the bat from the experienced Dinesh Karthik and Andre Russell turned out to be expensive for Kolkata Knight Riders. The Kolkata Knight Riders will be looking up to their big names to deliver and bring the team back on winning track.

The temperature will lie between 30-34 degree Celsius during the match hours. The chances of precipitation are low and the climate will be humid.

The pitch at Chepauk assists spinners in the latter half of the game and batting becomes a bit tricky as the pitch becomes slow. The teams in this VIVO IPL have defended low totals on this pitch. This match will start during day time so the pitch is expected to be even drier and thus can bring fortune for spinners once again.

Daniel Sams is still under quarantine period due to being tested COVID positive and will be unavailable for selection in the upcoming game as well.

Virat Kohli has got good starts in the two innings he has played by far in this season of VIVO IPL but was unable to convert the starts and must be eyeing on a big inning in this match. He also holds a decent record against Kolkata Knight Riders (KKR) in the VIVO IPL and has scored 725 runs at an average of 40.27 and 130.16 strike rate.

Glenn Maxwell is in good form has scored a half-century in the last game against Sunrisers Hyderabad (SRH). He will look to carry the momentum to this game as well.

AB de Villiers, after playing a match-winning knock in the first game, got out cheaply in the last game. He, too, holds a promising record in VIVO IPL against Kolkata and has scored a total of 435 runs at an average of 33.46.

Shubman Gill played a brief but effective inning in the last game against Mumbai Indians (MI) and will be looking forward to piling up a big inning to his name in this match.

Nitish Rana is looking in a brilliant touch and has scored half-centuries in both the games he has played by far. His performances, as an opener, have been stunning and he will be eyeing to play another good knock for his team in this game. 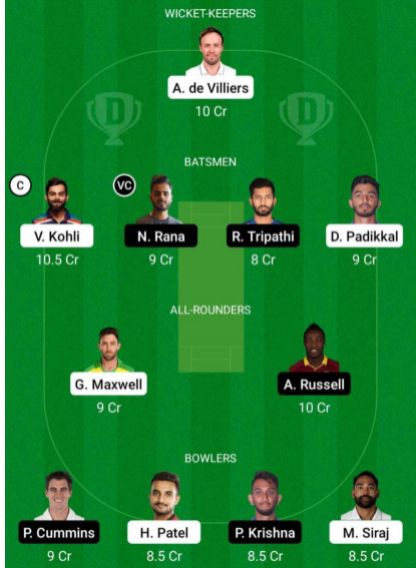 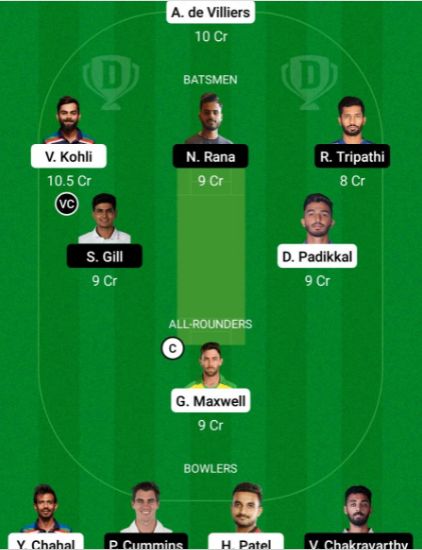 The recommended line-up for this game is 1-4-2-4. Shakib Al Hasan can be tried in the second team by replacing one of the batsmen (Nitish Rana/ Rahul Tripathi) as the Chepauk pitch is favouring spinners and he will bowl all the four overs of his quota.

Royal Challengers Bangalore is likely to win this game.