The 26th match of VIVO IPL 2021 will be played on the 30th of April at Narendra Modi Stadium, Ahmedabad (formerly known as Motera) between Punjab Kings (PBKS) and Royal Challengers Bangalore (RCB).

The game is scheduled to start at 07:30 PM IST and the live streaming can be seen on Star Sports network as well as Hotstar while the live scores and updates can be tracked on the CricketAddictor website.

Punjab Kings is currently positioned at the 6th spot on the points table with two victories out of 6 games. In their last game against Kolkata Knight Riders (KKR), the team faced yet another defeat. After losing the toss, the team was invited to bat first, in response to which the team scored a below-par total of 123 runs.

Mayank Agarwal scored a slow inning of 31 runs off 34 deliveries. Chris Jordan scored 30 runs off 18 deliveries towards to end to help them cross the 120-mark. KL Rahul and Nicholas Pooran scored 19 runs each. While defending this total, the opposition easily chased down this total with more than 3 overs remaining.

Moises Henriques, Mohammed Shami, Arshdeep Singh, and Deepak Hooda picked one wicket each. The team has grave issues in middle-order as players are not performing consistently and the team must be looking to resolve these issues as the team cannot afford many losses at this stage of the tournament.

Talking about Royal Challengers Bangalore, this team is currently at 2nd place on the points table with 5 wins out of 6 games. In their last game against Delhi Capitals (DC), the team won the game in a heart-stopping encounter on the last ball of the final over by 1 run. After losing the toss, the team was invited to bat first, in response to this, openers Virat Kohli and Devdutt Padikkal were dismissed early.

Rajat Patidar scored 31 runs off 22 deliveries while Glenn Maxwell scored 25 runs off 20 deliveries. Toward the end, AB de Villiers scored a magnificent 75 runs off just 42 runs and led the team to a total of 171 runs. While defending the total, the game went into the final over where the team won the game by one run on the last ball. Harshal Patel picked 2 wickets, Mohammed Siraj picked 1 wicket along with one wicket from Kyle Jamieson. The team looks good and is also in promising form, and must be looking for another win on the trot.

Out of a total of 26 encounters between the two teams, Punjab has won 14 games while Bangalore won 12 games.

The temperature will be near 40-degree Celsius. The chances of precipitation are low and an uninterrupted game is expected once again.

The pitch is helpful for both batsmen and bowlers but the dew factor comes into play in the second innings of the game and bowling becomes a bit difficult.

The average first innings score is 174 runs at this venue.

The chasing teams have won 50% of the games at this venue.

Scott Kuggeleijn, who joined Mumbai Indians as a reserve player, joins Royal Challengers Bangalore as a replacement for Kane Richardson.

KL Rahul has scored 240 runs in 6 innings he played till now in this season at an average of 48 and is the second-highest run-scorer in the tournament so far. He is a safe pick for multiplier choice once again.

Mayank Agarwal has scored 161 runs in 6 innings so far and can be a trump pick in this match. He has missed a big knock in the last few games and is likely to play a good inning.

Deepak Hooda has given small contributions with both bat and ball and has scored 110 runs apart from picking 2 crucial wickets, and he must be eyeing on another good performance for his team.

AB de Villiers has scored 204 runs in 6 matches at an average of 68 and a whopping strike rate of 174.35. He is another safe pick for multiplier choice as he is carrying a brilliant form.

Harshal Patel is currently the purple cap holder and has picked 17 wickets till now in just 6 games. He is one of the top picks for this encounter and is expected to do well once again.

Virat Kohli has scored 163 runs in 6 matches so far in this season’s VIVO IPL and is expected to get a substantial knock in this game as an opener of the team once again. 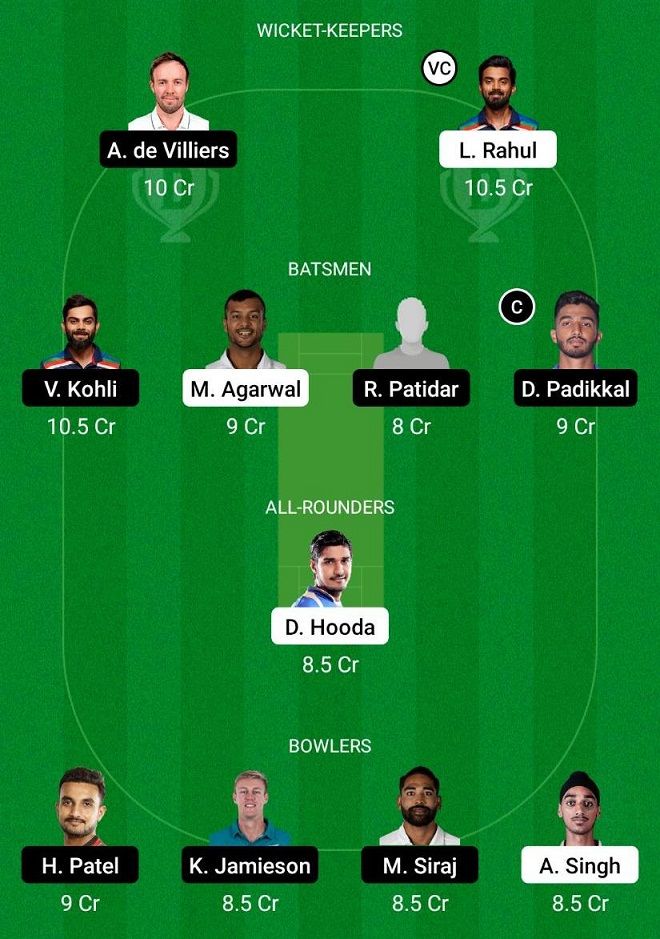 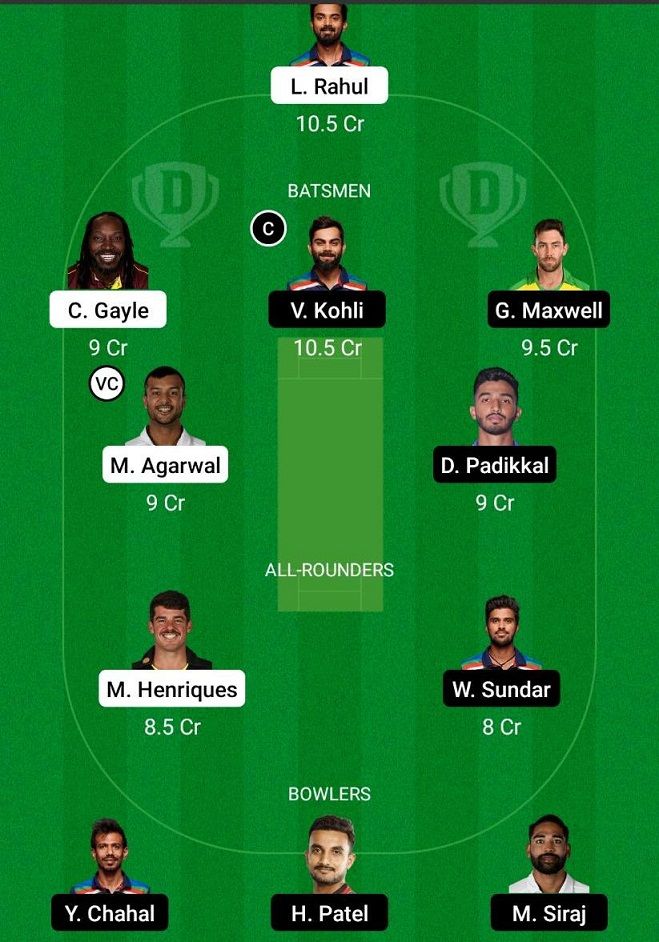 Glenn Maxwell can be picked in the first team instead of AB de Villiers. AB de Villiers can be tried as a captain in one of the teams for this match considering his excellent run of form with the bat.