Hazratullah Zazai has not put a foot wrong ever since he has been given an opportunity to play in this tournament.

This year’s Pakistan Super League has seen the inspiring story of two teams coming from far behind to make it to the final of this tournament. Multan Sultans made it to the eliminator based on run rate, but were able to edge past Islamabad United, who had won five successive matches coming into the playoffs. This will be Multan’s first final.

Peshawar Zalmi, on other hand, had to beat two teams in the playoffs to qualify for the final and they did that in some style. They strategically chased down the total set by Islamabad in Eliminator 2. The confident eight-wicket win will surely boost their confidence ahead of the final match.

Chasing has been a bit easy for the teams on this pitch. There will be dew for sure in the second innings, which helps the team that bats second. A score of around 180 can be expected here. The bowlers with a lot of variations can be useful.

Shoaib Maqsood has been a stand-out batter for Multan. It was his half-century that helped them to qualify for the final.

Hazratullah Zazai has not put a foot wrong ever since he has been given an opportunity to play in this tournament. He has scored 204 runs in four innings. The Afghan power-hitter has scored at a strike rate of 188.

Sohail Tanvir was the star who can be credited for taking this team to the final. His cameo against Lahore in the last league game helped his team post a huge total and then in the playoffs, he picked up figures of 3 for 17.

Shahnawaz Dhani is the highest wicket-taker in this tournament so far. He has picked up 20 wickets in 10 matches. The best figures of this tournament by him has been 4 for 5, which he picked up against Lahore.

Wahab Riaz has been the stand out bowler for his team in this tournament. He has picked up 18 wickets in 11 matches at a strike rate of 11.3.

Kamran Akmal has found his form back in the second half of the tournament. He has scored 247 runs so far at a strike rate of 129.

MUL vs PES Must Picks for Dream11 Fantasy Cricket: 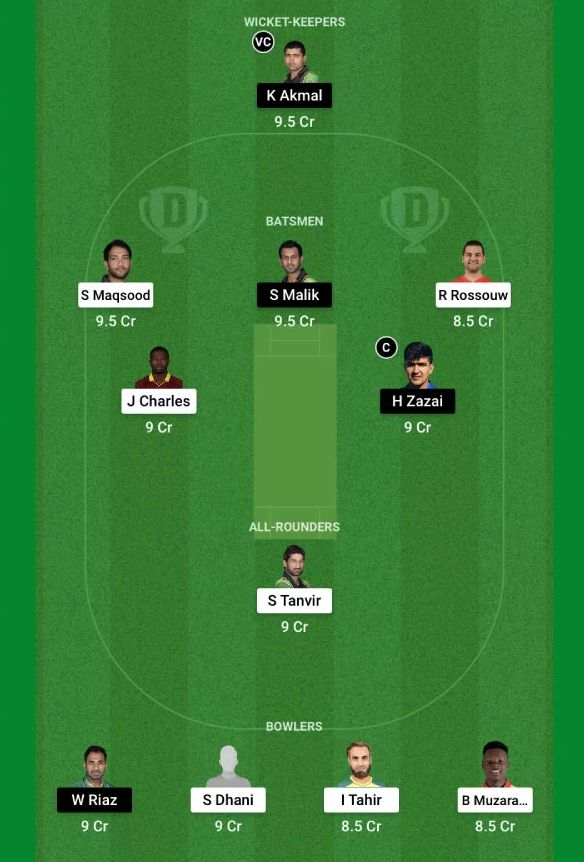 Mohammad Irfan is a good seamer but he might be a risky pick as a captain as there will better options who can get you more points.

Wahab Riaz has been bowling well but there are sometimes when he might not get the wickets, which makes him a risky captaincy pick.

Umaid Asif is someone who can be avoided with the abundance of batsmen and all-rounders available in this contest.