MS Dhoni Clean Bowled: Chennai Super Kings (CSK) are one of the few teams who have set their camps up early ahead of the Indian Premier League (IPL) 2021 season. That has come as no surprise considering CSK had a terrible 2020 IPL campaign over in Dubai where the team failed to even qualify for the playoffs.
Another big reason why CSK are sweating hard in the training is the number of players on their roster who have no or little real cricket action in recent months. Captain fantastic Mahendra Singh Dhoni is certainly amongst the players who have been dormant and has been spending time away from the cricket field.

There’s no denying the fact that CKS’s hopes and chances of a successful IPL 2021 campaign revolve a lot around MS Dhoni. His decision-making remains shrewd, but the 40-year-old former Indian captain has to have a good tournament with the bat as well. He is key in the middle-over, while his incredible finishing skills will be needed.
That being said, Dhoni’s lack of cricket at the highest level could come back to haunt both him and the team. If you are a CSK fan, then the sight of MS Dhoni’s wickets flying over the pitch would hurt you. It won’t be pleasing. Sadly, it happened in one of the practice sessions. Harishankar Reddy bowled a ripper to clean bowl MS Dhoni in CSK’s training. 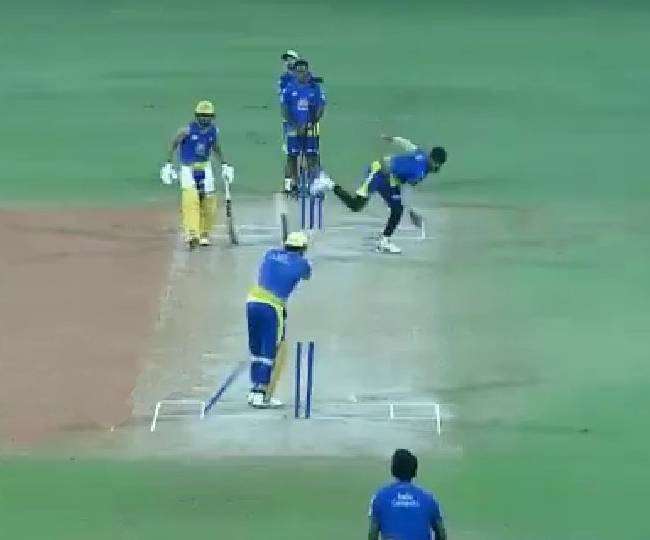 MS Dhoni: Heat Will Be On Him And CSK

There’s a certain level that is expected from the four-time IPL champions, and from MS Dhoni’s teams. Dhoni has set the bar quite high with his captaincy skills. But he is on the wrong end of the age. That fact was highlighted more often than not last season when Dhoni, quite uncharacteristically, took some controversial decisions. In fact, his usual marauding approach at the death overs while batting was lacking. To be blatantly true, Dhoni struggled. That’s the reason, Dhoni will be under pressure right from the opening game.