The 30th match of VIVO IPL 2021 will be played on 3rd May at Narendra Modi Stadium, Ahmedabad (formerly known as Motera) between Kolkata Knight Riders (KKR) and Royal Challengers Bangalore (RCB).

Kolkata Knight Riders are currently in 6th place on the points table. The team lost its previous game against Delhi Capitals as they failed to defend a par-total scored by its batters. After losing the toss, Kolkata was invited to bat first. Nitish Rana failed to play a big inning this time, Shubman Gill scored 43 runs off 38 deliveries and seems to have gained back his long-lost form.

Rahul Tripathi contributed 19 runs with the bat. Eoin Morgan and Sunil Narine both departed for a duck. Towards the end, Andre Russell scored 45 runs off 27 deliveries and led the team to a respectable total of 154 runs. But this total was not enough against the likes of Prithvi Shaw and Shikhar Dhawan, and the opposition chased this total with more than 3 overs left.

Pat Cummins was the sole wicket-taker for Kolkata in this game and picked 3 wickets. The team has issues in the middle-order as well as bowling as the big names have failed to deliver up to the expectations.

Talking about Royal Challengers Bangalore, the team is currently at 3rd place on the points table. In their last game against Punjab Kings (PBKS), the team fell flat while chasing as the batting lineup was trapped in the web woven by Harpreet Brar. After winning the toss, the skipper decided to bowl first, in response to this, Punjab Kings scored 179 runs on the board.

Kyle Jamieson picked 2 wickets while Yuzvendra Chahal, Daniel Sams, and Shahbaz Ahmad picked one wicket each. While chasing this total, opener Devdutt Padikkal succumbed cheaply to pacer Riley Meredith. Virat Kohli scored 35 runs while Rajat Patidar scored 31 runs. Towards the end, Harshal Patel contributed 31 runs off just 13 deliveries but in vain as the team was decimated for 145 runs and faced a loss by 34 runs. The team must learn from its mistakes and look forward positively to the upcoming games.

Out of a total of 27 encounters between the two teams, Kolkata has won 14 games while Bangalore has won 13 games.

The temperature will be near 40-degree Celsius. The chances of precipitation are very low and humidity will be around 14%.

The pitch is helpful to both batsmen and bowlers equally but the dew factor comes into play in the second innings of the game and bowling becomes a bit difficult towards the latter half of the game.

The average first innings score is 170 runs at this venue.

The chasing teams have won 53.8% of the games at this venue.

No new updates are available regarding injury and availability from either of the camps. Will be added when there is an update.

Nitish Rana has scored 201 runs in 7 innings but has failed to impress in the last few games and is likely to get back his form in this game.

Andre Russell is in good form, he has scored 163 runs apart from picking 7 wickets. He played a brilliant knock in the previous game as well. He is a safe pick as a multiplier once again.

Pat Cummins has also contributed with both bat and ball for his team in this season and picked 9 wickets apart from scoring 93 runs.

AB de Villiers has scored 207 runs in 6 innings and is in brilliant form. He didn’t deliver in the last game up to expectations and must be eyeing onto a good game with the bat.

Harshal Patel has picked 17 wickets by far in the 7 games and currently is the purple cap holder in the tournament. He also contributed few runs with the bat in the previous game.

Virat Kohli has not delivered up to the expectations till now in the tournament and has scored 198 runs in 7 innings and must be looking to get a massive knock to his name. He is another safe pick for multiplier’s choice here. 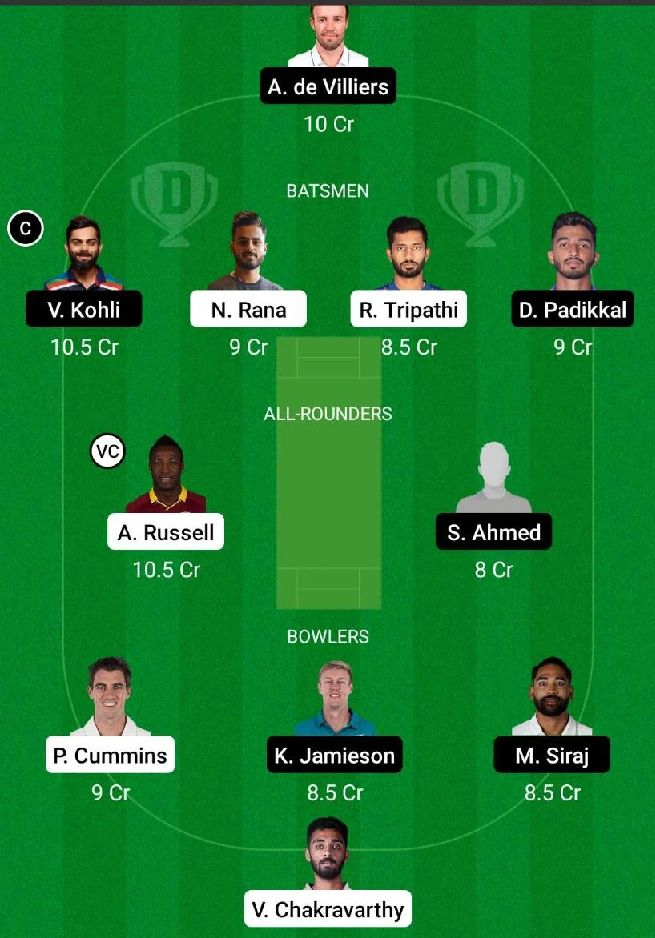 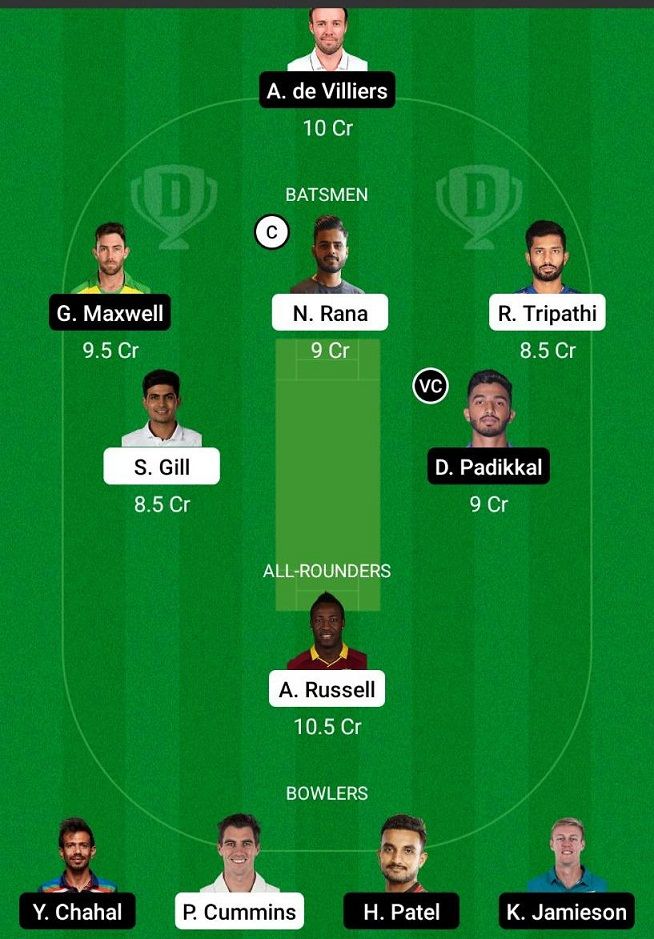