IPL Suspended: In the wake of the massive COVID-19 outbreak in several franchises camp, the Board of Control for Cricket in India (BCCI) were forced to take the harsh call on suspending the 14th edition of the Indian Premier League (IPL) indefinitely with immediate effect. Varun Chakravarthy and Sandeep Warrier from the Kolkata Knight Riders camp, Amit Mishra from Delhi Capitals, Wriddhiman Saha from Sunrisers Hyderabad and 2 non-playing members from the Chennai camp have tested positive for Covid-19. It is still not certain whether the tournament will resume in future or not.

IPL Suspended: Overseas Players worried on how they will return home

According to the recent sources, the overseas players from different IPL franchises are very much worried about how will they go back home in this unprecedented situation. Earlier this week, the Australian government announced that the Australian residents and citizens are banned from entering the country within 14 days of being in India and consequently, those who disobey these orders will face fines and jail term. Australia Prime Minister Scott Morrison also confirmed that there would be no special arrangement for the IPL-bound players to return back to their country.

However, in their official statement, the BCCI has clearly mentioned that they will do everything within their powers to arrange safe and secure passage of all the participants involved in IPL 2021.

“The BCCI will do everything in its powers to arrange for the secure and safe passage of all the participants in IPL 2021,” read the official statement from BCCI.

“Situation is unprecedented. I just spoke to my franchise managers about how I will return to Australia. They have asked us to wait as they are waiting for BCCI’s instructions. I along with my other Australian colleagues are worried, how and where I will go back”, said an Aussie player.

“I spoke to Slater today morning. He is stuck in Maldives – no idea where to go. We don’t want to get into such a situation. I am confident, BCCI and franchises will do something about our return journey. I don’t want to spend anytime here anymore”, stated a very worried overseas player of Sunrisers Hyderabad. 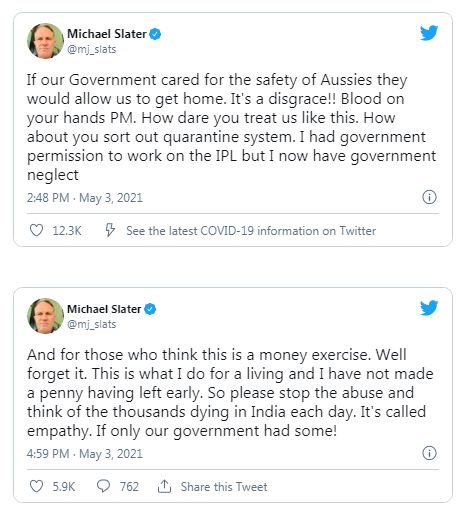 It is also to be noted that majority of the countries have imposed travel restrictions for those coming from India amidst the recent surge in the number Covid-19 cases in all parts of India. Australia has already imposed a travel ban till May 15 while the England players will have to serve a 10-day quarantine period at a government approved hotel and coronavirus test on days 2 and 8 before being eligible to enter UK. On the other hand, the flights from India to Bangladesh stands suspended right now but the land border is open with the players serving a compulsory 14-day quarantine. The players from South Africa and West Indies can travel back to their respective countries but the issue is that UAE which is a major transit point for most of the flights, is currently not entertaining any air travel from India. New Zealand hasn’t yet released any type of travel restrictions from India and thus, all the Kiwi players are allowed to return home.