IPL 2021 News: All the media reports and uncertainties regarding the phase 2 of the Indian Premier League (IPL) have finally ended. The Board of Control for Cricket in India (BCCI) Vice-President Rajiv Shukla has confirmed that the remaining 31 matches of the IPL 2021 season have been shifted to the UAE. The massive development comes amidst BCCI’s ongoing Special General Meeting (SGM) to decide the details regarding  the IPL and T20 World Cup.

According to its latest media advisory, BCCI has decided to host the second leg of the IPL in the UAE due to the bad weather in India around September-October. It is understood that the board is currently in talks with the Emirates Cricket Board (ECB) and they are reportedly happy to host the remaining matches of IPL 2021 in Dubai, Abu Dhabi and Sharjah. However, the source further added that the BCCI will now speak to the foreign boards about the availability of overseas players during the September-October window. 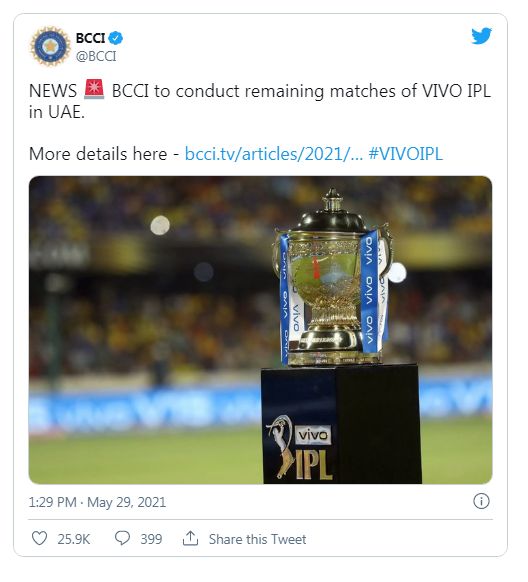 “The Board of Control for Cricket in India (BCCI) on Saturday announced to complete the remaining matches of VIVO Indian Premier League 2021 season in the United Arab Emirates (U.A.E) considering the monsoon season in India in the months of September-October this year. The decision was taken at a Special General Meeting (SGM) held virtually, where members unanimously agreed to resume IPL,” stated the media advisory released by the BCCI.

The second priority of BCCI’s SGM was to come on a conclusion whether this year’s T20 World Cup will be held in India or not. However, the BCCI has asked the International Cricket Council (ICC) to give them some more time to come up with a final decision on the T20 World Cup and will possibly take the appropriate call till the end of June or start of July with regards to the situation of coronavirus pandemic in India.

“The BCCI SGM further authorised the Office Bearers to seek an extension of time from the ICC to take an appropriate call on the hosting of ICC T20 World Cup 2021,” further added BCCI’s media advisory.