Young speedster Avesh Khan is looking like a prime contender for the purple cap.

Royal Challengers Bangalore’s juggernaut finally came to a halt in their last game against Chennai Super Kings. While Virat Kohli’s men are still a part of the top three, what will bother him and the Bangalore team management is the manner in which they lost their last game.

Chasing a target of 192, all RCB could muster up was 122, as a fight was missing from them. It was not missing in Delhi’s last game, as Rishabh Pant’s boys fought bravely to secure a win in the Super Over against Sunrisers Hyderabad. Both teams might have won the same number of games, but momentum is certainly in the Capitals’ favour.

At the time of writing, the first game of IPL 2021 at the Narendra Modi Stadium was yet to be played. However, what we can understand from the past results is that the pitch will help the batsmen a bit more than the bowlers.

Shikhar Dhawan has scored 40+ runs on three occasions in this season, which includes two half-centuries as well. He has scored over 25 runs in all of his knocks, barring one.

Virat Kohli had a poor outing against Chennai Super Kings, but he has scored over 30 runs in three of the five matches he has played.

Axar Patel was Delhi’s hero in his very first game of IPL 2021. He picked up 2 wickets by conceding only 26 runs and bowled superbly in the Super Over.

Harshal Patel might have been at the receiving end of Ravindra Jadeja’s carnage in the last match, but he also picked up 3 wickets. What really sets him apart is that he has picked up at least 2 wickets in all of his games of IPL 2021 so far.

Young speedster Avesh Khan is looking like a prime contender for the purple cap. He added three more to his wickets tally in the last game against Sunrisers Hyderabad.

AB de Villiers was dismissed for just 4 runs in the last game, but the delivery that got him out would have dismissed most of the world’s most renowned batsmen. Having said that, de Villiers also has played two match-winning knocks already, against Mumbai Indians and Kolkata Knight Riders.

Thanks to a very formidable top-order, Rishabh Pant hasn’t had to do much with the bat in this season. But when it mattered, he scored a crucial 37 in the last game.

DC vs RCB Must Picks for Dream11 Fantasy Cricket: 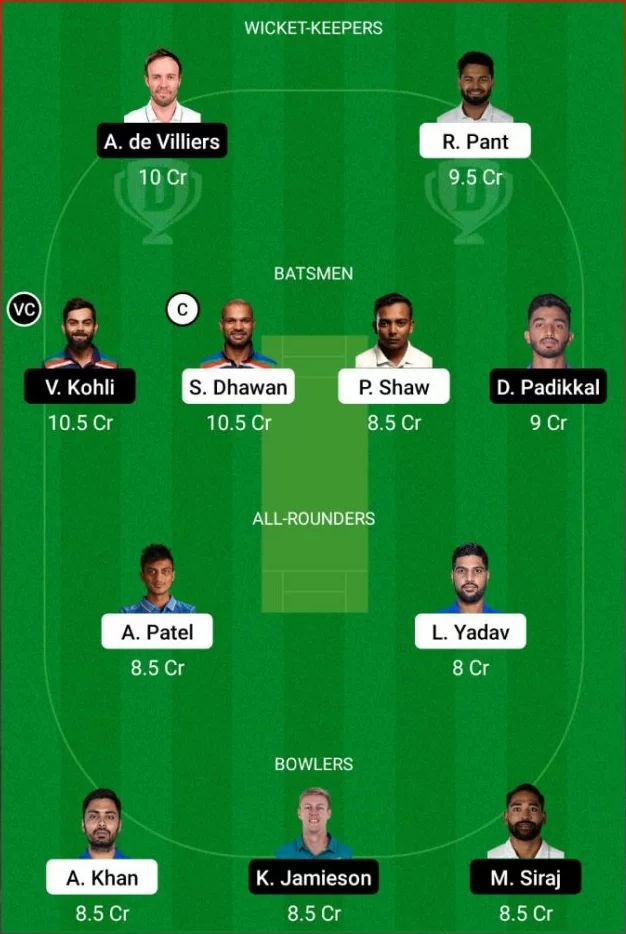 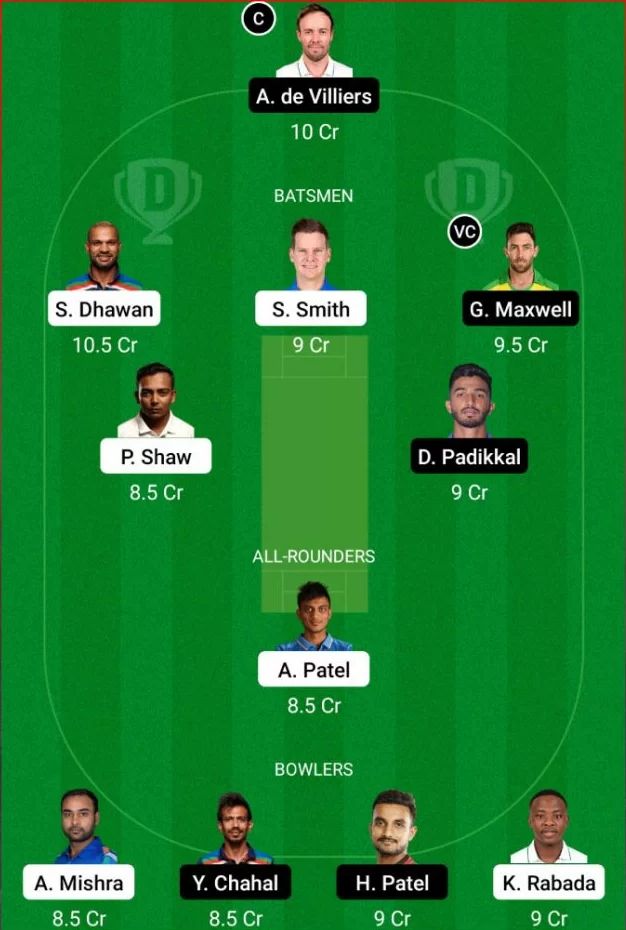 Glenn Maxwell is one of the few RCB batsmen who showed a glimpse of a fight in their last game, as he scored 22 runs from 15 deliveries. He has scored two half-centuries in this competition.

Devdutt Padikkal has looked in ominous touch since the last two games. He was RCB’s highest run-scorer against Chennai Super Kings, and scored a fantastic century against Rajasthan Royals.

Daniel Christian is batting way down the order to make any real difference with the bat, while he is not getting many opportunities with the ball as well. It is better not to pick him for this game.