The Rajasthan Royals franchise after winning the first season of the IPL has not been successful in reaching the play-offs of the tournament in almost all seasons. With a tag of an underdog, they have been supported by the crowd to cause a major upset. In the last match, the captain Sanju Samson scored a sensational century but failed to hit the winning runs for the team. Surely, the team must have a good enough boost to perform well in the rest of the matches. If the team’s bowling performance is better than the first match, the team has the capability to reach the playoffs.

Who can replace Ben Stokes in RR vs DC?

The all-rounder Ben Stokes injured himself during the 1st league match against Punjab Kings and is ruled out of the Indian Premier League 2021. While South African player David Miller has completed his 7-day quarantine after arriving in India on April 6. With a good experience of playing in the T20 cricket and IPL, he can be the middle-order option in place of Ben Stokes. 10 days before, he looked in good touch against the Pakistan team in the ODI series. Here is the tweet posted by him today. 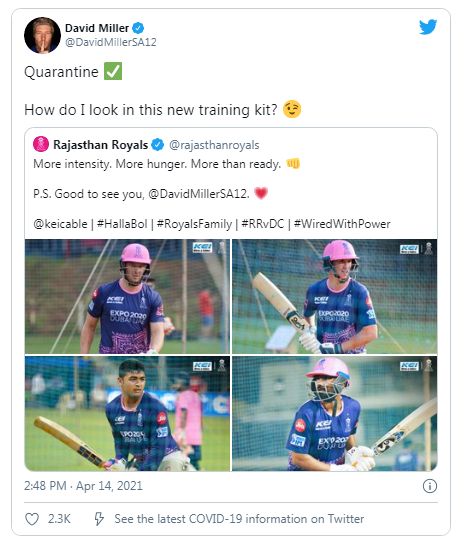 The other option is Liam Livingstone who played well against the Indian team in the ODI series last month. He participated in this year’s BBL and has been a terrific performer at the top-order or middle-order. It will be up to team management to decide who can the best option.

Predicting the batting positions for RR in Match 7 IPL 2021

With Ben Stokes unavailable for the entire tournament, the team is expected to change their batting combination. Now, Buttler and Manan Vohra can be the openers who have played enough IPL games and T20 cricket at the top-order. Then captain Samson at no.3 to give him more time at the crease. Shivam Dube and Riyan Parag will follow Samson at no. 4 and no.5 respectively. Then David Miller/ Liam Livingstone and Chris Morris will provide the finishing touch to the team.