Daniel Sams Covid Positive: In yet another massive setback ahead of the start of the 14th edition of the Indian Premier League (IPL), Royal Challengers Bangalore’s (RCB) all-rounder Daniel Sams has tested positive for the coronavirus. Earlier, RCB opener Devdutt Padikkal also tested positive for the deadly virus before joining the camp and he was put under home quarantine in Bengaluru. Royal Challengers Bangalore will start their IPL 2021 campaign against the defending champions Mumbai Indians (MI) on April 9 in Chennai.

RCB have released an official statement mentioning that while checking into the team hotel in Chennai on April 3 with a negative COVID-19 report, Sams’ second test conducted on April 7 came out to be positive. It has also been confirmed that the Aussie all-rounder is currently asymptomatic and under strict isolation. RCB’s medical team is in constant touch with Sams and they will continue to monitor his health while taking care of all the BCCI protocols. 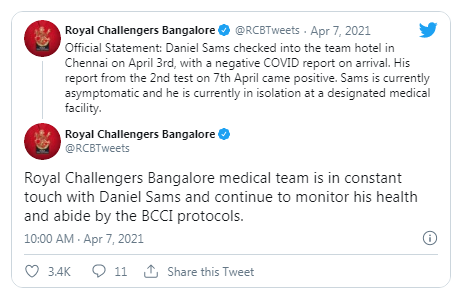 “Daniel Sams checked into the team hotel in Chennai on April 3rd, with a negative COVID report on arrival. His report from the 2nd test on 7th April came positive. Sams is currently asymptomatic and he is currently in isolation at a designated medical facility,” said the official statement released by RCB.

“Royal Challengers Bangalore medical team is in constant touch with Daniel Sams and continue to monitor his health and abide by the BCCI protocols,” the statement added.

IPL 2021: Will Padikkal and Sams be available for the tournament opener?

Devdutt Padikkal has reportedly tested negative after fighting with the deadly virus for almost two weeks. He will be joining the RCB camp in Chennai only after taking some more tests and a chest scan that will eventually satisfy the bio-secure bubble protocols issued by the BCCI. However, in a huge blow, both Padikkal and Daniel Sams will not be available for the tournament opener against MI on Friday.