Chennai Super Kings (CSK) vs Rajasthan Royals (RR) Dream11 Prediction, Fantasy Cricket Tips, Fantasy Team, Playing XI, Pitch Report, Dream11 Team, Injury Update of VIVO IPL 2021. Both the teams have won one of their two games in this tournament so far and will be desperate for the second win.

The twelfth match of VIVO Indian Premier League (IPL) 2021 is set to be played on 19th April between Chennai Super Kings and Rajasthan Royals at Wankhede Stadium, Mumbai.

The twelfth match of VIVO IPL 2021 will be played between Chennai Super Kings (CSK) and Rajasthan Royals (RR) at Wankhede. Both the teams have played 2 games each, out of which both won one of the matches while lost the other.

Chennai Super Kings, after losing the first match to Delhi Capitals, made a strong comeback and comfortably defeated the Punjab Kings in their second game. In the second game, after winning the toss, Captain MS Dhoni decided to bowl first. Pacer Deepak Chahar proved the captain’s decision correct and hunted nearly all the top-order batsmen of the opponent in his starting spell itself.

He picked 4 wickets and became Player of the Match for this outstanding performance with the ball. Dwayne Bravo, Moeen Ali, and Sam Curran also picked a wicket each. Ravindra Jadeja contributed with his brilliant fielding performance as always. This helped Chennai Super Kings to restrict Punjab to a low total of 106 runs.

Chennai Super Kings easily chased this total down with the help of 36 runs from Faf du Plessis and 46 runs from Moeen Ali. With the return of Lungi Ngidi, this team looks even more balanced and will be looking to win another game.

Talking about Rajasthan Royals, this team also won their second match after being defeated in the first match. In their second game against Delhi Capitals, Captain Sanju Samson decided to bowl first after winning the toss. The comeback man Jayadev Unadkat bowled cunningly and picked the wickets of three top-order batsmen without allowing them to reach even a two-digit score.

Jayadev Unadkat also became the Player of the Match in this game. With the help of 2 wickets from Mustafizur Rahman and 1 wicket from Chris Morris, Rajasthan Royals restricted the Delhi Capitals to a total of 147 runs. While chasing the target, opener Jos Buttler and Manan Vohra again failed to impress with the bat. Sanju Samson and Shivam Dube, too, failed to deliver up to expectations and departed early.

David Miller single-handedly carried the match and scored 62 runs off 43 deliveries before getting out. In the end, all-rounder Chris Morris finished the game for Rajasthan Royals by hitting back-to-back sixes in the final over. With the unavailability of Ben Stokes, this team now lacks a quality all-rounder and must be looking up to Chris Morris to repeat his brilliant performances as in the last game.

The temperature will lie between 28-33 degree Celsius. The precipitation chances are pretty low and humidity will be around 64% during the course of this game.

The new pitch being used in Wankhede is a little tricky to bat on as the ball gets a little tacky. After witnessing a few high scoring games, the matches now are evenly balanced with help to both batters and bowlers.

The chasing team has won 52.7% of VIVO IPL games at Wankhede.

Lungi Ngidi is likely to be available for selection in this game for Chennai Super Kings.

Faf du Plessis played a decent inning of 36 not-out while chasing against Punjab Kings (PBKS). He must be looking to get a big inning in this match. He is a safe pick for multiplier choice once again.

Suresh Raina smashed a brilliant half-century in the first game against Delhi Capitals (DC). He also holds the record for second-highest run-scorer against Rajasthan Royals in VIVO IPL wherein he has scored a total of 609 runs in 21 innings he played so far.

Moeen Ali gave consistent contributions from the bat in both games he has played by far and must be looking to carry on his momentum in this game as well. He can be considered as a multiplier pick.

Sanju Samson, being the captain of Rajasthan Royals, has huge responsibilities on his shoulder and is expected to deliver with the bat once again. He can single-handedly change the course of the game on his days.

Chris Morris is looking in positive touch with both bat and ball. He also led the team to victory in the last match with his explosive batting in the last over.

Jos Buttler has failed by far with the bat in the past two games he played and must be looking to make a comeback and contribute to the team’s cause. 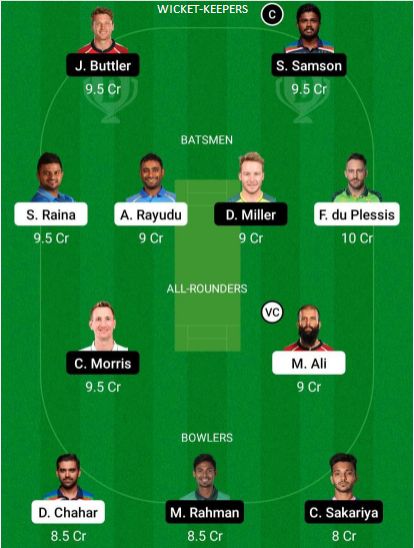 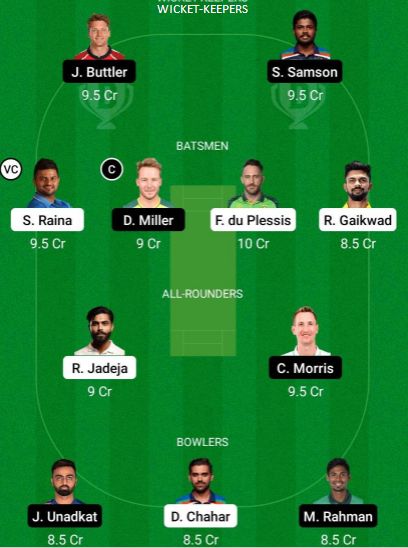 The recommended combination for this game is 2-4-2-3. Chris Morris and Faf du Plessis can be tried as multiplier picks as well.