The VIVO IPL 2021 will witness its 3rd double-header on 25th April and the daytime game will be played at Wankhede Stadium, Mumbai between Chennai Super Kings and Royal Challengers Bangalore. Both the teams have played four games each. Chennai Super Kings have won 3 out of 4 games and is on a winning streak from last three games, and are positioned 2nd on the points table while Royal Challengers Bangalore is the only undefeated team in this season of VIVO IPL 2021 so far and is comfortably sitting at top of the table with 4 out of 4 victories.

Chennai Super Kings (CSK) have completed a hat-trick of victories after losing their first game and all their departments look well-rounded and resolved now. The openers gaining back their form is yet another huge positive for this team. In their last game against Kolkata Knight Riders (KKR), after losing the toss, they were invited to bat first.

In response to this, with the help of 64 runs off 42 deliveries by Ruturaj Gaikwad and a terrific 95 runs off 60 deliveries by Faf du Plessis, the team reached a mammoth total of 220 runs. Moeen Ali also played a cameo inning of 25 runs off 12 deliveries and contributed to this cause.

While defending this total, Deepak Chahar bowled a mesmerizing spell and picked 4 wickets in the powerplay itself. Lungi Ngidi also picked 3 wickets while Sam Curran picked one wicket but proved to be really expensive. In the last-over thriller, Chennai Super Kings finally registered a victory. The team is in good form and must be looking for another win in the upcoming game.

Talking about Royal Challengers Bangalore, the team is still undefeated and has a pretty settled combination. In the last game against Rajasthan Royals, after winning the toss, skipper Virat Kohli decided to bowl first and Mohammad Siraj destroyed the top-order of opposition by picking 3 wickets.

Harshal Patel continued his excellent form and picked 3 wickets once again. Kyle Jamieson, Kane Richardson, and Washington Sundar picked one wicket each and restricted Rajasthan Royals to a total of 177 runs. While chasing this total, the Royal Challengers Bangalore hunted down this score without losing even a single wicket and registered a comfortable victory by 10 wickets.

Opener Devdutt Padikkal scored a brilliant century (101 runs off 52 deliveries), including 11 fours and 6 sixes. Skipper Virat Kohli played a supporting yet terrific knock of 72 runs off 47 deliveries to help his team chase it down. The team is looking like a juggernaut and crushing every team that’s coming on its way, they must be eager to register another victory here.

Out of a total of 26 encounters between the two teams, Chennai won 16 games, Bangalore won 9 games while 1 game went resultless.

The temperature will lie between 28-33 degrees Celsius. The precipitation chances are low and humidity will be around 66%.

The pitch at Wankhede is apt for batting and it might help the bowlers in the daytime so a good contest between bat and ball is expected once again.

The chasing team has won 53.3% of VIVO IPL games at Wankhede.

There are no injury/availability updates from both camps. Will be added when there is an update.

Faf du Plessis has scored 164 runs in four innings and has gained his form in the last two games. He must be looking for another big inning in this match to help his side with a flying start.

Deepak Chahar has been absolutely brilliant with the new ball and so far, has picked 8 wickets for his team. He is capable of destroying the batting lineup of any team on his day.

Ruturaj Gayakwad seems to gain back his form in the last game by scoring a terrific half-century. He has scored 84 runs in 4 innings in this season of VIVO IPL.

Devdutt Padikkal scored a brilliant century in the last game and has piled up 137 runs in the 3 innings he has played by far. He will a safe pick for the multiplier in this game.

Virat Kohli also got the much-needed big knock to his name in the last game and has scored 143 runs by far in this season of VIVO IPL. 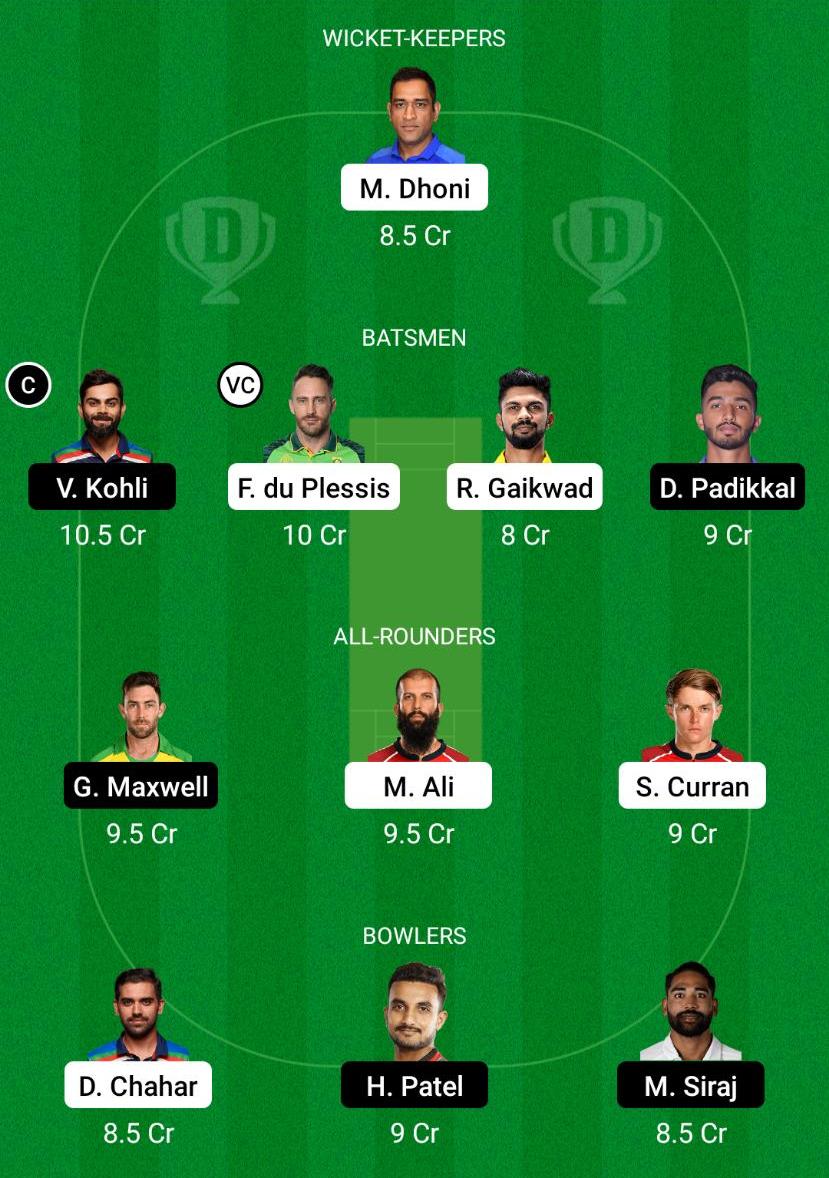 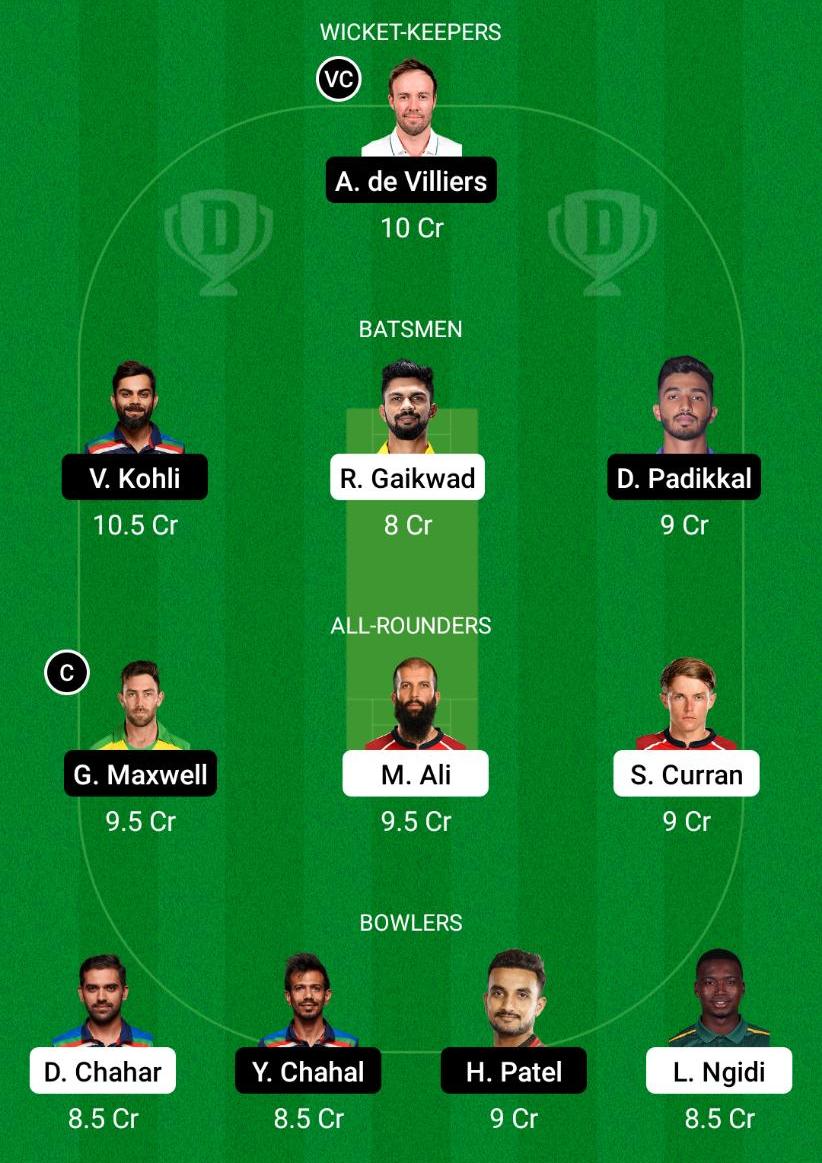 Suresh Raina can be picked instead of one of the all-rounders in the second team. Moeen Ali can be tried as a vice-captain in one of the teams.