St Lucia Kings got off to a nightmarish start as they were thoroughly thrashed by Jamaica Tallawahs in their first match. All the bowlers went for plenty of runs and there was no game plan against any batsman. They have got quality players in the team, who know a thing or two about making a comeback.

On the other hand, after losing their 1st game against Guyana Amazon Warriors, defending champions Trinbago Knight Riders made an incredible comeback and won the next game by 6 wickets against Barbados Royals. Isuru Udana with the ball, and later a captain’s knock from Kieron Pollard gave a commanding victory for them.

t’s a good sporting wicket where there is equal support for both batters and bowlers. The wicket has got genuine bounce where the batters can play the shots on the rise. Anything over 170 is a defendable score on this venue.

Tim David has been recently roped by RCB for the second leg of the IPL, and we can tell why. He is carrying his form from the English county season to CPL. He smashed a 28-ball 56 runs against Jamaica Tallawahs, which included 8 fours and 3 maximums.

Knight Riders mainly rely on Lendl Simmons at the top of the order. The veteran batter has managed to score only 10 runs in 2 matches in this tournament, but he is expected to do well in this match.

Roston Chase is a good pick from the all-rounders. He picked up 2 wickets and scored 11 runs against Jamaica Tallawahs. His performances will be vital in the upcoming matches for the Kings.

Kieron Pollard came in when his team was struggling at 38/4 in the run-chase against Barbados Royals, and then single-handedly won the game for his side by scoring unbeaten 58* runs from 30 deliveries.

Obed McCoy is a talented pacer, who is good at varying his pace at the death overs. Despite going 13 runs an over against Jamaica Tallawahs, he picked up 3 wickets.

Akeal Hosein is getting better and better with each passing game. In 2 matches in this tournament, he has picked up 3 wickets at an economy of 4.37, with the best figures of 2/17.

Tim Seifert failed to convert his starts into big ones in both matches so far. In 2 matches in this tournament, he has scored 38 runs, with the best score of 23.

SLK vs TKR Must Picks for Dream11 Fantasy Cricket: 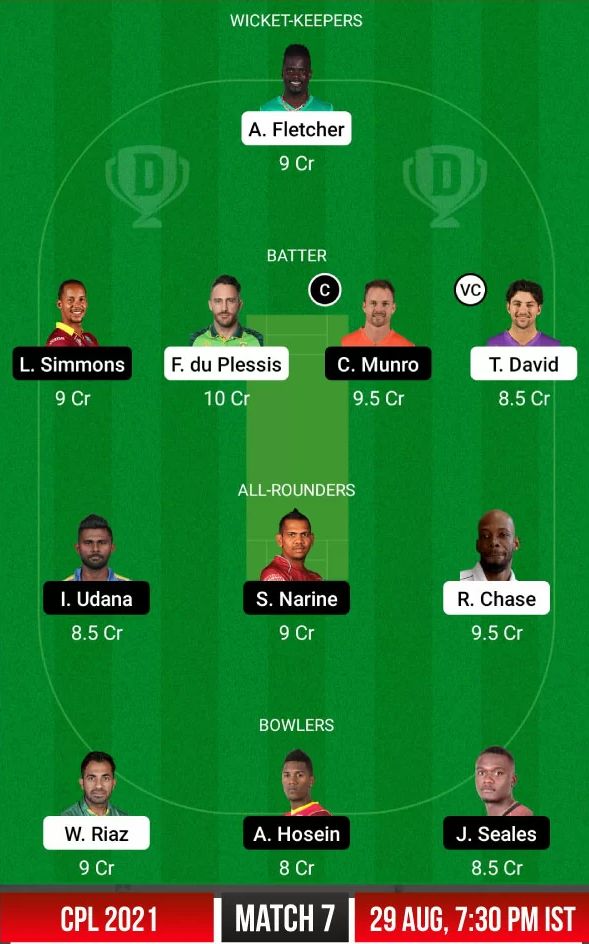 Faf du Plessis was got out after facing the first ball against Jamaica Tallawahs. He is a risky captaincy pick for your fantasy teams.

Isuru Udana came as a surprise package and picked up 5 wickets against Barbados Royals. You can take a risk and pick him as your fantasy team skipper.

With plenty of options available in the bowlers’ slot, it’s better to avoid Kesrick Williams while making your fantasy teams.