Jeavor Royal is a great budget pick at 8 credits.

Guyana Amazon Warriors will take on St Lucia Kings in the 22nd match of the CPL 2021. Guyana Amazon Warriors have seen lots of ups and downs in this tournament. They lost to Barbados Royals in their previous game by 45 runs. None of the batters played for long apart from Odean Smith, which resulted in their loss. With 3 wins and 4 losses, they have placed themselves at fourth spot in the standings with 6 points.

St Lucia Kings are in splendid form at the moment, having won 3 consecutive matches on the trot. They defeated table-toppers St Kitts and Nevis Patriots on both occasions by 100 runs and 6 wickets, which has given them a lot of confidence heading into this match. With 4 wins and 2 losses, they are placed at the third spot in the standings with 8 points.

The batters have done well in the last couple of matches, and they were able to tackle the bowlers quite well. Anything over 170 puts the team batting first on the driver seat. Batting first is a preferable option.

Considering the form of Chandrapaul Hemraj, he is a must-pick for your fantasy teams. He is the leading run-scorer for Guyana Amazon Warriors with 190 runs in 7 matches at an average of 31.66 and a strike rate of 145.03.

Faf du Plessis is the first batter to score a century in this year’s CPL. He is back to his old version after the initial struggles in this tournament. He has scored 168 runs in 6 matches at an average of 33.6.

Mohammad Hafeez is a perfect pick for your fantasy teams in the all-rounder’s slot. The Pakistani veteran has scored 167 runs and has picked up 5 wickets at an impressive economy of 5.6.

Roston Chase is having a dream tournament in this year’s CPL. He leads the leading run-scorers’ list with 241 runs in 6 matches at an average of 80.33. With the ball, he has scalped 6 wickets at an economy of 6.4.

Romario Shepherd is making a habit of picking wickets in every match. In only 5 matches in this CPL, he has picked up 14 wickets at an economy of 6.52, with the best figures of 3 for 15.

Alzarri Joseph is a good buy for your fantasy teams. With his consistent pace and accurate line and lengths, he has done a decent job in this year’s CPL by picking up 5 wickets in 5 matches.

Andre Fletcher is still not able to match his old standards. However, he has scored 145 runs in 6 matches at an average of 29 and a strike rate of 125. 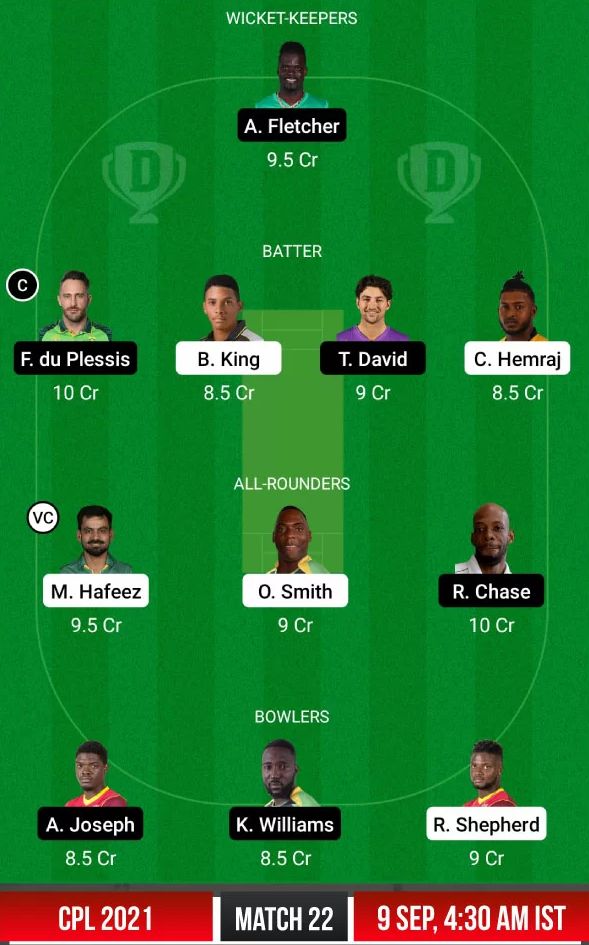 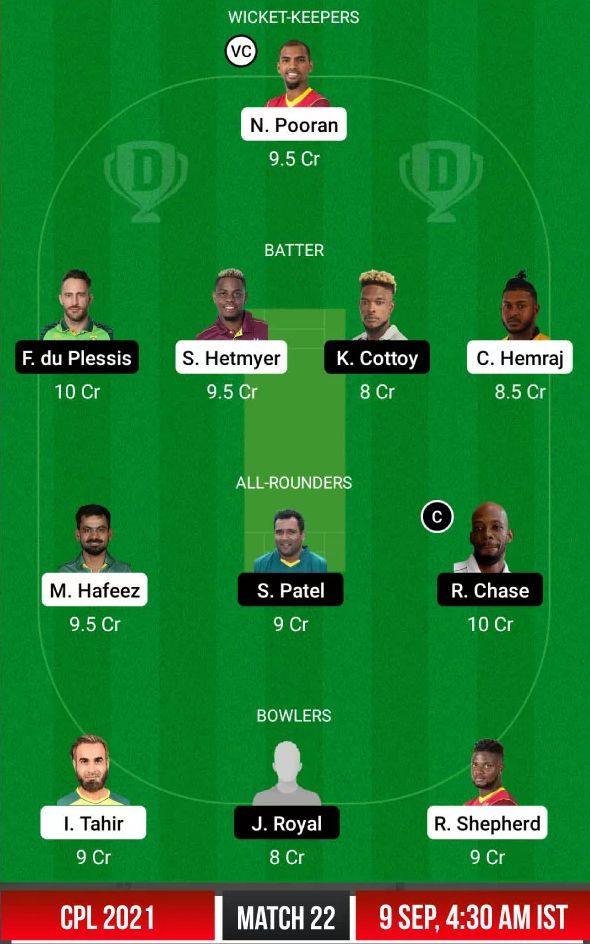 Shimron Hetmyer has scored 149 runs in 6 innings so far in this tournament at an average of 24.83, with the highest score of 54. He is a risky captaincy pick for your fantasy teams.

Tim David has notched 132 runs in 5 matches in this CPL, with the limited opportunity he has done so far. You can take a risk and pick him as your fantasy team skipper.

Shoaib Malik is not at his best of forms in this tournament. He averages 7.4 with the bat. Going with his recent performances, it’s better to avoid him while making your fantasy teams.