by cricknewz
in CPL, Cricket News
0

Caribbean Premier League 2021 is all set to kick start from August 2021. West Indies Cricket Board have tweaked the schedule to open a window for the second leg of the IPL. This competition will be an excellent opportunity for West Indies players to prepare themselves ahead of the T20 World Cup.

Guyana Amazon Warriors will take on defending champions Trinbago Knight Riders in the inaugural game of the tournament. Guyana Amazon Warriors will hope for better luck this season, as they have lost 5 finals so far. They reached the semi-final of the last season. On the other hand, Trinbago Knight Riders will be aiming for their fifth title in the CPL. They defeated St Lucia Zouks by 8 wickets last year to clinch the title for the fourth time.

The batters can make a good impact from the start as the ball comes quite easily onto the bat. Having said that, the bowlers can trouble the batters if they bowl in the right channels. The average 1st innings score in the last 5 matches is 180 and the teams chasing have a 60 per cent win record.

Shimron Hetmyer is a dangerous batter and can clear the fence with a lot of ease. He had a good last edition, where he ended as the fourth-leading run-scorer with 267 runs in 11 matches, at an average of 33.37.

Mohammad Hafeez brings more balance to the Guyana Amazon Warriors team. He has been performing really well lately with the ball recently. The veteran Pakistan all-rounder is a must pick for your fantasy teams.

Kieron Pollard can bat anywhere in the batting order. He has enough firepower to take any bowler on from the start. In the last edition, he has scored 207 runs in 7 innings at an average of 51.75 and also picked up 8 wickets.

Naveen-ul-Haq is picking wickets for fun at the moment. He is currently the leading wicket-taker in the T20 Blast 2021, where he scalped 26 wickets in 14 matches at an economy of 8.67.

Jayden Seales is an upcoming young pacer who has impressed with his fierce bowling in the Test series against Pakistan, where he picked up 11 wickets in 2 matches. We can expect similar performances from him in this match.

Nicholas Pooran has got all the qualities of a leader, but it will be interesting how he is going to perform with additional responsibilities on his shoulder. He mustered 245 runs in 11 matches in the last edition at an average of 27.22.

GUY vs TKR Must Picks for Dream11 Fantasy Cricket: 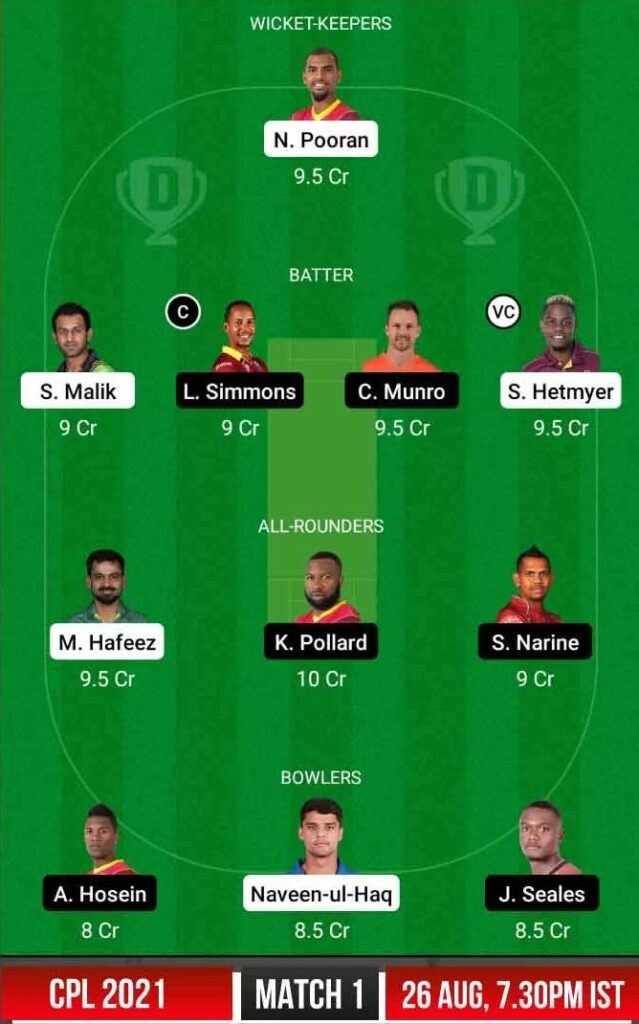 Shoaib Malik is a well-known batter who has experience playing for different leagues across the globe. He is a risky captaincy pick for your fantasy teams.

Tim Seifert has made it to the New Zealand squad for the upcoming T20 world cup. The wicketkeeper-batter scored 133 runs in the last edition at an average of 22.16. You can take a risk and pick him as your fantasy team skipper.

With plenty of big names in the batters slot, it’s hard to find a spot for Chandrapaul Hemraj in the final eleven.

West Indies and Pakistan announce squads ahead of the first Test