Dwayne Bravo and Chris Gayle’s inclusion will be the biggest boost for St Kitts and Nevis Patriots.

Barbados Royals will be up against St Kitts and Nevis Patriots in the 2nd match of the CPL 2021. Barbados Royals didn’t have the greatest of the campaigns last year, as they finished fifth in the standings with 6 points. They managed to win only 3 of their 10 matches. It will be interesting to see how they are going to perform this year.

St Kitts and Nevis Patriots had a terrible last edition, where they finished at the bottom of the table with 3 points. Chris Gayle and Dwayne Bravo are the new recruits for them this season. With experienced players coming into the side, they look more formidable.

There is plenty of support out there for the batters and the bowlers need to be more accurate in their line and lengths. Anything over 180 is a good competitive total on this wicket.

Glenn Phillips had an excellent English summer, where he scored the most runs for Gloucestershire in the T20 Blast. He scored 500 runs in 12 matches at an average of 55.55.

Evin Lewis will be a key player for St Kitts and Nevis Patriots at the top of the order. It’s impossible to stop him when is in top gear. He was the top scorer for St Kitts last year, where he scored 235 runs at an average of 26.11.

Jason Holder had a good season last year, where he scored 192 runs in 10 matches at an average of 21.33 and even scalped 10 wickets with the ball.

Dwayne Bravo’s inclusion can change the fortunes for St Kitts and Nevis Patriots this season. The veteran all-rounder is an effective bowler at the death and can be a good finisher with the bat as well.

Mohammad Amir is a lethal weapon for Barbados Royals. He bowls quick and can give breakthroughs with the new ball.

Fawad Ahmed was part of Trinbago Knight Riders last year. He finished as the fourth-highest wicket-taker the last edition with 13 wickets in 11 matches, with the best figures of 4 for 21.

Shai Hope is yet to make his name in the T20 format. He is the no.1  batter for West Indies in the 50-over format and it will be interesting how he will go in this edition.

BR vs SKN Must Picks for Dream11 Fantasy Cricket: 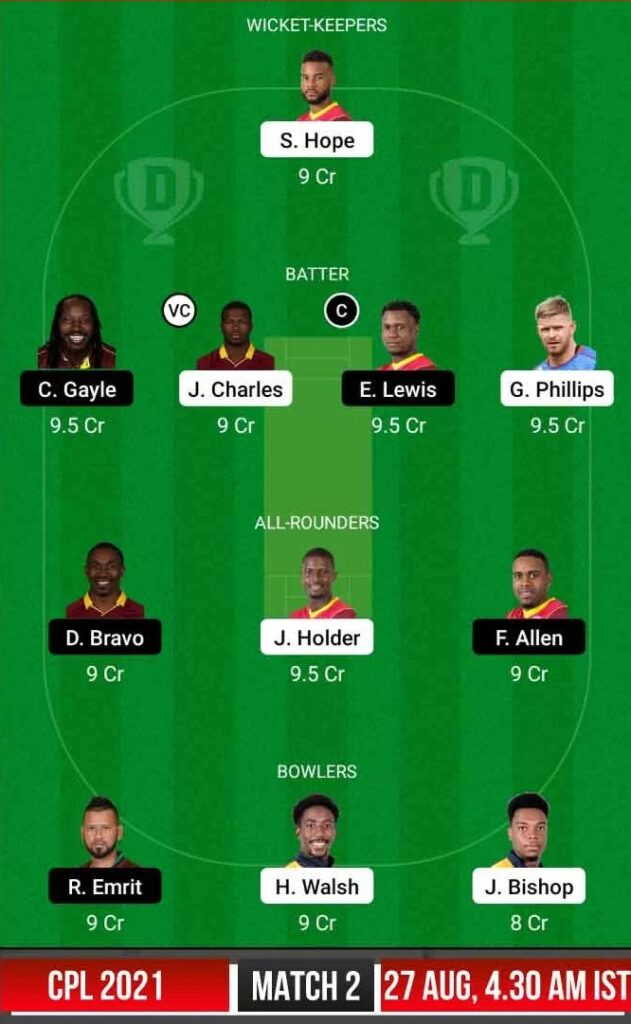 Kyle Mayers was the leading run-scorer for Barbados Royals last year, where he mustered 222 runs in 9 matches and picked up 2 wickets as well. It’s worth a risk and to pick him as your fantasy team skipper.

Chris Gayle knows well his performances in this tournament can earn him a place in the West Indies squad for the upcoming T20 World Cup. The Universe Boss will be determined to do well and he is a risky captaincy pick for your fantasy teams.

Ashley Nurse averaged 15.28 with the bat last year and scalped only 2 wickets with the ball. Hence, it’s better to avoid him while making your fantasy teams.

ENG vs IND: Rishabh Pant reveals why the umpires told him to change his stance in Leeds

ENG vs IND: Rishabh Pant reveals why the umpires told him to change his stance in Leeds