BAN vs SL Stats : Bangladesh will take on Sri Lanka in the first of three ODI matches at Shere Bangla National Cricket Stadium in Dhaka on Sunday, 23 May. Both the sides will look to give their best to earn some important World Super League points in this series.

Bangladesh haven’t been in good position since their ODI series win against West Indies this January as after that they have lost Test series to West Indies and Sri Lanka and limited overs series against New Zealand so they’re under pressure but it’s also a good opportunity for them as they’re against a weak Sri Lanka side under a new captain Kusal Perera. The return of Shakib al Hasan and Mustafizur Rahman have strengthened the team and the likes of Tamim Iqbal, Mushfiqur Rahim and Liton Das need to play big roles to bring their team back on right track.
On the other side, Sri Lanka too have been struggling in limited overs as West Indies crushed them in March and resultant they’re playing under a new captain Kusal Perera and the likes of Dimuth Karunratane, Dinesh Chandimal and Angelo Mathews have been dropped and it’s a good opportunity for youngsters to show their talent and skills.

Bangladesh vs Sri Lanka Statistical Preview of the First ODI :

A list of all the major stats and records ahead of the First ODI between Bangladesh and Sri Lanka in Dhaka.

Head to Head in Test Cricket : Bangladesh and Sri Lanka have played 48 ODI matches so far.

3 – Both Bangladesh and Sri Lanka have lost each of their last three ODIs. Bangladesh lost to New Zealand while Sri Lanka lost against West Indies. 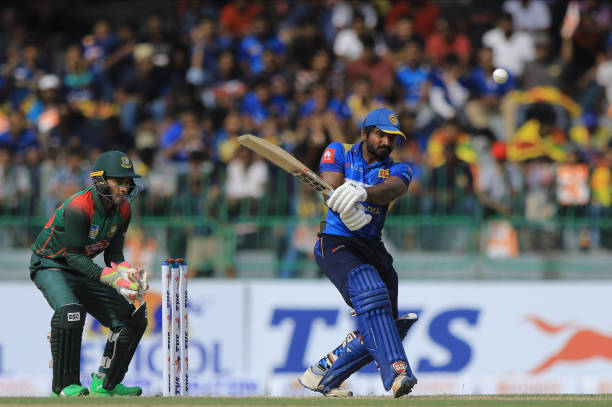 13.8 – Mustafizur Rahman has taken 41 wickets at an average of 13.8 in 18 ODI matches at Shere Bangla National Stadium in Dhaka so far.