Evin Lewis and Quinton de Kock are the best captaincy picks for your fantasy teams.

West Indies missed out on the opportunity to take a 2-0 lead in the 2nd T20I, as their batters went too hard at the bowlers in the middle overs. They did a great job to restrict the visitors for just 166 runs, but despite some wonderful power-hitting from Fabian Allen, they lost the match.

Meanwhile, South Africa pulled things back in the 2nd T20I and won the game by 16 runs to level the series 1-1. George Linde went for a lot of runs in the 1st T20I, but he bowled a crucial spell in the 2nd T20I by picking up 2 important wickets, which won the game for South Africa. There is still a lot of scope for improvement, especially the death bowling needs to be addressed.

It’s a dry surface with not much grass on it. It’s hard to control the run-flow in the initial overs and varying the pace will be the key for the bowlers in the death overs. Whoever wins the toss should bowl first.

Evin Lewis is playing some ruthless cricket in this series. As expected, he got the start in the 2nd T20I but was dismissed by the raw pace of Andre Nortje. In 2 matches, he has scored 92 runs at a strike rate of 180.39.

Reeza Hendricks batted superbly in the 2nd T20I. He took charge against the South African bowlers from the start and played some remarkable shots, until he was dismissed for 42 runs from 30 balls.

Fabian Allen was outstanding in the 2nd T20I with the bat in the death overs. He bought some sort of hope in the West Indies camp with his ease of six-hitting. He scored 34 runs from just 12 balls, which includes 5 sixes.

George Linde was the player of the match in the 2nd T20I for his excellent bowling. He conceded just 19 runs from his 4 overs, and more importantly, picked up the wickets of Nicholas Pooran and Andre Russell.

Dwayne Bravo will come in handy at the death overs. He has got good pace variations and is also pretty good at striking the ball. In 2 matches in this tournament, he has picked up 2 wickets at an economy of 8.42.

Tabraiz Shamsi is the most economical bowler so far in this series. He has picked up 2 wickets in 2 matches at an economy of 5.37.

Andre Fletcher held his end in the 2nd T20I when wickets were tumbling at the other end. He scored important 35 runs for his side. In 2 matches in this series, Fletcher has scored 65 runs at a strike rate of 118.18.

Quinton de Kock was playing well in the 2nd T20I, until he was dismissed for his own mistake. In 2 matches, he has scored 63 runs at a strike rate of 143.18.

WI vs SA Must Picks for Dream11 Fantasy Cricket: 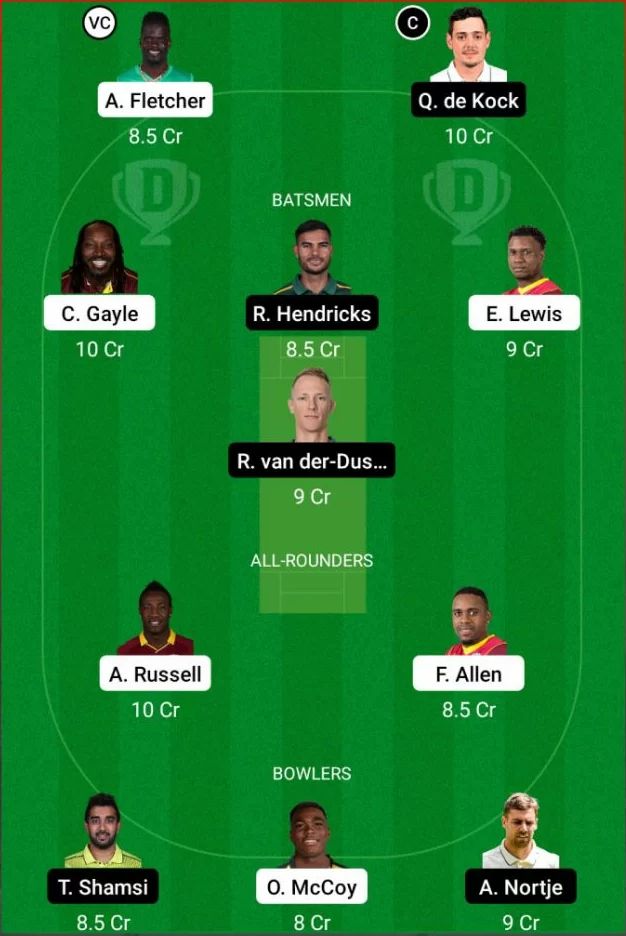