Trent Boult Funny Fielding : The Kiwi was one the architects of Mumbai Indians’ stunning win over Sunrisers Hyderabad in the last game. The left-arm pacer clinched three wickets and conceded just 8 runs in his last 2 overs to choke SRH’s chase in the death overs. Although he nailed his yorkers perfectly in bowling, the same wasn’t the case with his fielding. He tumbled, lost his balance, and failed to chase a ball while fielding at mid-off. Boult’s hilarious fielding effort has left all fans in splits.

SRH batsman Jonny Bairstow drove a full-toss away from mid-off on the last ball of the fifth over. Boult, fielding at mid-off, tried to chase the ball. He started well and sprinted to his right.

However, as he came close to the ball, he lost his balanced and fumbled. The MI bowler tried his best to prevent himself from falling. As he saw the ball racing too the fence, he dived desperately. But that was too late and too little an effort as by then the ball had crossed the boundary.

Krunal Pandya, the bowler was clearly unimpressed by Boult’s fielding effort and he didn’t hide his emotions. However, the fans saw the lighter side of the event and the social media flooded with humorous reactions from fans. 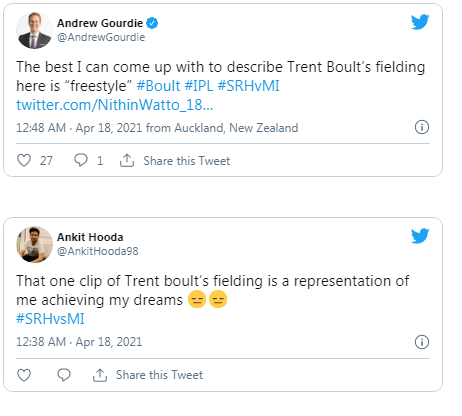 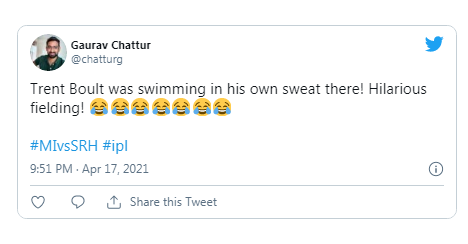