Yuzvendra Chahal wife Dhanashree: The Royal Challengers Bangalore team has won 3 out of 3 games in the IPL 2021. The brilliance of overseas players like Ab De Villiers and Glenn Maxwell pushed the team to go post 204 on the scoreboard. The Australian all-rounder Maxwell is the most consistent batsman for the team and is the second-highest leading run-scorer in the tournament. Apart from them, the bowlers have done a commendable job in these 3 league matches. The pace bowlers Harshal Patel, and Kyle Jamieson have been consistent wicket-takers, while Siraj and Yuzvendra Chahal have been economical as compared to other seasons.

Chahal wife Dhanashree gets emotional in RCB vs KKR

Dhanshree Verma, the wife of Yuzvendra Chahal got emotional after the spinner scalped his first wicket of IPL 2021. For the past few months, he was out of form and was not able to take wickets. His performance in the Australian limited-overs series was not encouraging and was dropped from the Playing XI in the England side after 1 appearance. His international debut came through the performances in the IPL. In 102 appearances in the IPL, he has picked 123 wickets at an economy of 7.70. In the first 2 league matches of this season, he could not take a wicket, but finally picked 2 important wickets of Nitish Rana and Dinesh Karthik in the match against RCB.

These were the tweets made by RCB fans on Twitter. 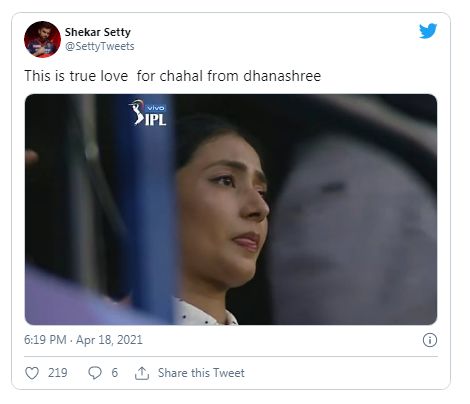 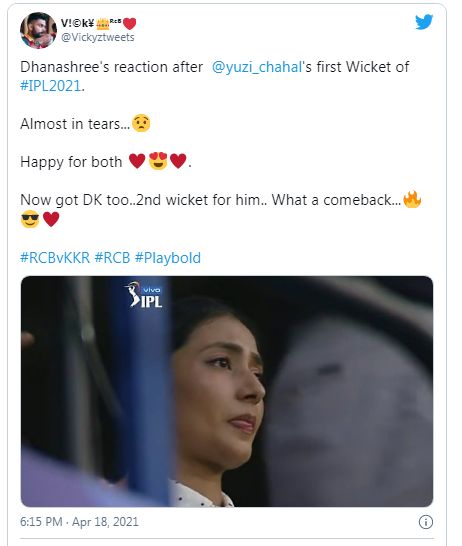 The batsmen of RCB like Glenn Maxwell and Ab De Villiers are in top-form, while captain Kohli has been a good support to the team as well. The bowling unit has been impeccable in the first 3 league matches, with Harshal Patel being the leading wicket-taker in the tournament. Other bowlers like Kyle Jamieson, Chahal, and Siraj have been proven performers in the T20 format. They are most likely to continue their consistent performances in the upcoming matches.