Rajasthan Royals (RR) vs Kolkata Knight Riders (KKR) Dream11 Prediction, Fantasy Cricket Tips, Playing XI, Fantasy Team, Pitch Report, Dream11 Team, Injury Update of VIVO IPL 2021. The two teams of the bottom four will take on each other in this game. Both the teams are coming off a defeat in their respective last matches.

The eighteenth match of VIVO IPL 2021 will be played on the 24th of April at Wankhede Stadium, Mumbai between Rajasthan Royals (RR) and Kolkata Knight Riders (KKR).

The eighteenth match of VIVO IPL 2021 will be played between Rajasthan Royals and Kolkata Knight Riders. Both the teams have played four games till now and both have won only one of these four games.

Rajasthan Royals have won only one out of four games they have played and has woes in both the batting and bowling department. The top-order of the team has crumbled time and again and the bowling department lacks the spearhead to penetrate the opposition batting lineup. In the last game against Royal Challengers Bangalore (RCB), after losing the toss, Rajasthan Royals were invited to bat first and the top-order again surrendered against the bowling of the opposition.

Jos Buttler scored just 8 runs while Manan Vohra departed for just 7, skipper Sanju Samson scored 21 runs while David Miller was trapped for a duck. With the help of 46 runs off 32 deliveries from Shivam Dube, 40 runs off 23 deliveries from Rahul Tewatia, and 25 runs from Riyan Parag, the team reached a decent total of 177 runs.

While defending this total, the bowlers failed to even pick even a single wicket and the team faced a huge defeat by 10 wickets. The team is still positioned at the bottom of the table and must try to improve in the concerned areas.

Talking about Kolkata Knight Riders, this team also has its own issues in the middle-order, the bowling department has failed to perform collectively as a team, and out of form skipper, Eoin Morgan is also one of its major weaknesses. The team is positioned at 6th place in the points table after winning one out of four games they have played so far. In the last game against Chennai Super Kings (CSK), the team decided to bowl first after winning the toss.

In response to this, Chennai Super Kings reached a mammoth total of 220 runs. Varun Chakravarthy, Sunil Narine, and Andre Russell picked one wicket each. While chasing this total, the top-order of Kolkata Knight Riders collapsed and was on the verge of a one-sided defeat.

With the help of explosive innings of 54 runs off 22 deliveries from Andre Russell, 66 runs off 34 deliveries from Pat Cummins and a supporting 40 runs off 24 deliveries from Dinesh Karthik, the team gave an overwhelming fight to the opposition but failed to convert it into a victory. The team must be looking positively to perform in the next game and get two important points for the side.

Out of a total of 23 clashes between Rajasthan Royals and Kolkata Knight Riders in VIVO IPL, Rajasthan won 10 games and Kolkata won 12 games while one of the games went result-less.

The temperature will lie between 28-33 degrees Celsius. The precipitation chances are low and humidity will lie around 63%.

The match is expected to be high scoring as the batters get help from the pitch of Wankhede in both innings. The dew factor might come into play in the second inning of the game and thus the toss-winning team is likely to bowl first once again.

The average first innings score in VIVO IPL at this stadium is 176.

The chasing teams have won 53.3% of VIVO IPL games at Wankhede

Chris Morris has shown a positive approach as an all-rounder and has scored 48 runs and also picked 5 wickets for his team so far in this tournament. He has high expectations to perform with both bat and ball and can be considered as a multiplier pick once again.

Rahul Tewatia is potentially a great performer for Rajasthan Royals and has scored 81 runs apart from picking a vital wicket. He can turn out to be a trump pick in the team for this encounter.

Sanju Samson, being the captain of Rajasthan Royals, has huge responsibilities on his shoulders to perform with the bat but has failed by far except for a century in the first game. He has scored 145 runs in the season and must be looking to get a good knock once again here.

Pat Cummins has shown intent with both bat and ball and has picked 4 wickets and also scored 72 runs, including a quickfire knock of 66 runs in the last game. He can be destructive with the ball against the fragile batting lineup of Rajasthan Royals.

Andre Russell has shown a great all-round performance and has scored 99 runs and also bagged 7 wickets so far. He will be among the top fantasy picks for this match.

Nitish Rana is in overall good form with the bat and has scored 164 runs by far but has failed to deliver in the last game and must be looking forward to another big inning to his name. 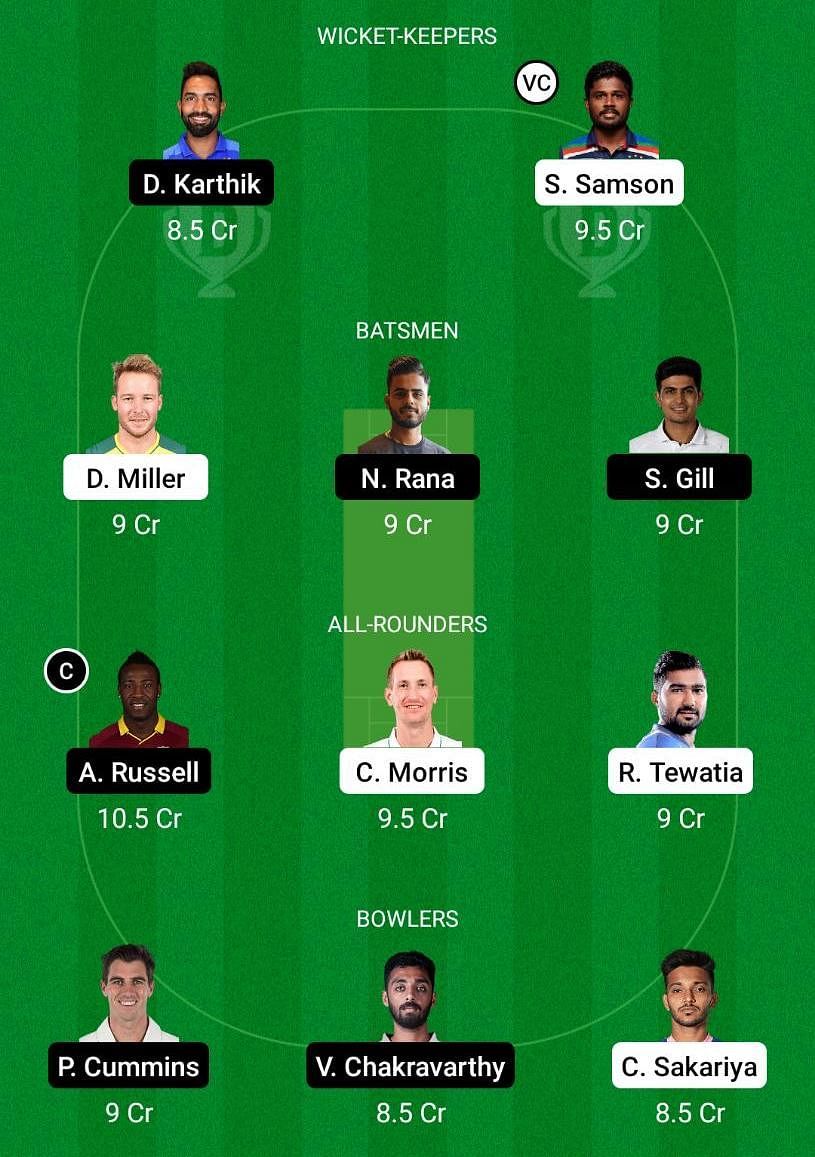 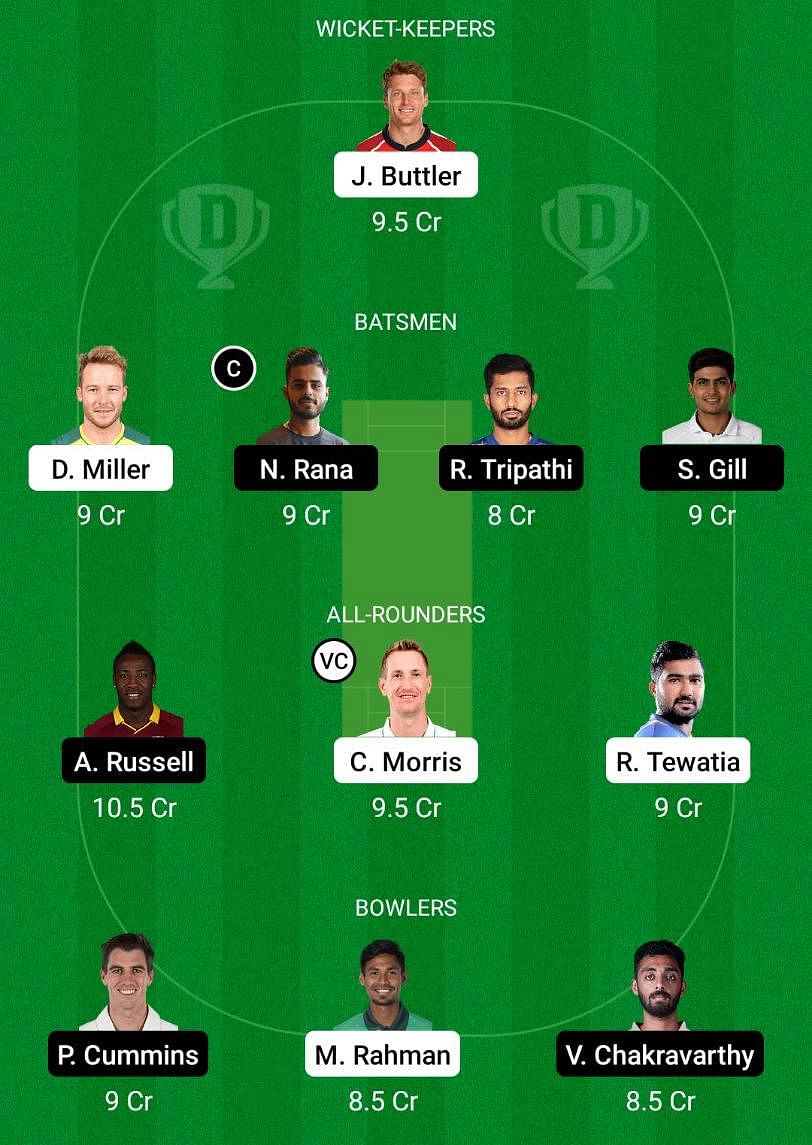 Pat Cummins can prove to be a good pick as a vice-captain in one of the teams. Prasidh Krishna can also be taken into the team by replacing one of the all-rounders.

PBKS vs MI IPL 2021: Rohit Sharma Abusing Umpire after he wrongly gave him out? WATCH VIDEO

PBKS vs MI IPL 2021: Rohit Sharma Abusing Umpire after he wrongly gave him out? WATCH VIDEO