The sixteenth match of VIVO Indian Premier League (IPL) 2021 is set to be played on 22nd April between Royal Challengers Bangalore and Rajasthan Royals at Wankhede Stadium, Mumbai.

The sixteenth match of VIVO IPL 2021 will be played between Royal Challengers Bangalore (RCB) and Rajasthan Royals (RR) at Wankhede Stadium. Royal Challengers Bangalore are on a golden run of form and have completed a hat-trick of victories and will look forward to continuing their winning streak. On the other hand, Rajasthan Royals have won only one out of the 3 games they played so far.

Royal Challengers Bangalore is the only team that is still undefeated in the tournament by far and is comfortably sitting on the top-most position of the points table. In their last game against Kolkata Knight Riders, after winning the toss, the Bangalore skipper Virat Kohli decided to bat first but he departed cheaply.

Rajat Patidar got a new role as a middle-order batsman but failed to impress with the bat once again. As soon as Glenn Maxwell came to bat, he took the central stage and smashed the bowlers out of the park. He scored 78 runs off 49 deliveries, including 9 fours and 3 sixes. Devdutt Padikkal also scored a slow 25 runs and played the role of the anchor upfront.

Towards the end of the inning, the showman AB de Villiers showed his class once again and played a breathtaking knock of 76 runs off 34 deliveries to help the team reach a huge total of 204 runs. While defending this total, the bowlers did a decent job and restricted Kolkata Knight Riders to a total of 166 runs, and registered a victory by 38 runs.

The notable bowling performances were 3 wickets from Kyle Jamieson, 2 wickets each from Yuzvendra Chahal and Harshal Patel, and a wicket from Washington Sundar as well. The team is in good form and is likely to continue with their winning combination.

Chris Morris grabbed 2 wickets while Mustafizur Rahman and Rahul Tewatia picked a wicket each. While chasing this target, the Rajasthan Royals got off to a poor start and lost opener Manan Vohra and skipper Sanju Samson cheaply. While on the other end, Jos Buttler single-handedly carried the innings and scored 49 runs off 35 deliveries.

Apart from him, Rahul Tewatia scored 20 runs while Jaydev Unadkat scored 24 runs but still failed to lead the team to victory and faced a defeat by 45 runs. The middle order of Rajasthan Royals is a major concern for them and they must be looking to improve on that front.

Out of a total of 23 clashes between Royal Challengers Bangalore and Rajasthan Royals, the scoreline is evenly poised at 10 victories to both teams while 3 games went resultless. Both the teams will try to gain a lead over the other in this match.

The temperature will hover between 27-33 degree Celsius. The precipitation chances are low and humidity will be around 61%.

The pitch at Wankhede support batters with a little help to the bowlers on offer. The game is expected to be high scoring. There is negligible help for the spinners on this track.

The chasing team has won 51.3% of VIVO IPL games at Wankhede.

Daniel Sams has been tested negative for COVID and will be available for selection for the upcoming games for Royal Challengers Bangalore.

Liam Livingstone has flown back to England due to bubble fatigue and won’t be taking part in remainder of the VIVO IPL 2021.

AB de Villiers is in great form as always and he has scored 125 runs in the 3 innings he played this season at an average of 62.50. He will be eyeing for a successful outing once again in this match.

Glenn Maxwell is in golden form with the bat and has scored 176 runs by far this season at an average of 58.66. He will be a safe pick for multiplier choice in this game.

Virat Kohli has failed to deliver up to expectations till now with the bat and has scored just 71 runs. He must be eyeing to get a big inning to his name in this game.

Sanju Samson, after getting a century in the first game, has failed to deliver with the bat in the last two games. Being the captain of the team, he must be looking for another big knock.

Chris Morris has been consistent with the ball and by far he has picked 5 wickets and also scored 38 runs, including a crucial knock in winning cause for the team.

David Miller is in positive touch and has scored 64 runs in the 2 innings he played. He must be looking to pile up huge runs to his name in this game once again. 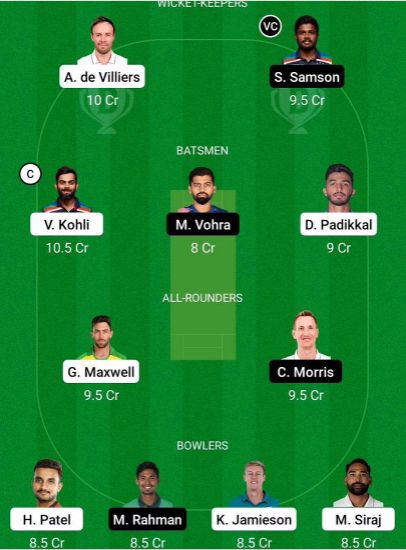 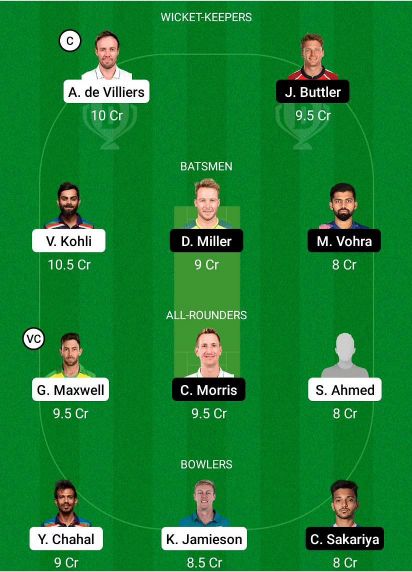 Devdutt Padikkal can be tried in the second team in place of Chris Morris. Chris Morris can also be tried as a vice-captaincy pick in one of the teams.

Royal Challengers Bangalore (RCB) are the probable winners for this clash.