Karachi Kings have had a topsy-turvy run in the 2021 edition of the Pakistan Super League (PSL). In their six-match run, the Imad Wasim-led team hasn’t won two games in a row. In their previous game, the Multan Sultans defeated them by 12 runs despite Babar Azam’s valiant half-century.

Placed fourth in the points table with three wins from six games, they have every chance of sliding further down if they don’t start winning frequently. Their next match is against Islamabad United, led by Imad Wasim, on Monday, June 14 at the Sheikh Zayed Stadium in Abu Dhabi.

In their previous meeting, it was the United, who came out trumps by five wickets. However, Islamabad have been dealt with a blow after Hasan Ali decided to pull out of the remaining matches due to personal reasons. The United, meanwhile, are comfortably placed in the second position.

Playing combination for ISL vs KAR

Since the United won’ be having the services of Hasan Ali, the United might rope in Ali Khan to fill in the void. Hasan is currently their leading wicket-taker with an excellent economy rate. Muhammad Musa, Mohammad Wasim Jr, and Akif Javed have looked decent in the matches they have played.

In batting, Colin Munro and Usman Khawaja are in excellent form. A lot will again depend on them if the United have to win another game. The middle-order, including Hussain Talat, Asif Ali, and Iftikhar Ahmed need to step up as well. The onus will also be on skipper Shadab Khan to deliver the goods.

Karachi Kings have depended heavily on Babar, who has 343 runs from six games in PSL 2021 at the average and strike rate of 114.33 and 137.75 respectively. With four fifties and a score each in the 90s and 80s, he has shown his class. His opening partner Sharjeel Khan has 204 runs to his name.

Martin Guptill strained in the previous game and he would want to make amends. In the bowling department, Thisara Perera was exceptional last time around. Skipper Imad and Mohammad Amir have to be on their toes as well. Waqas Maqsood and Arshad Iqbal have their roles to play as well. 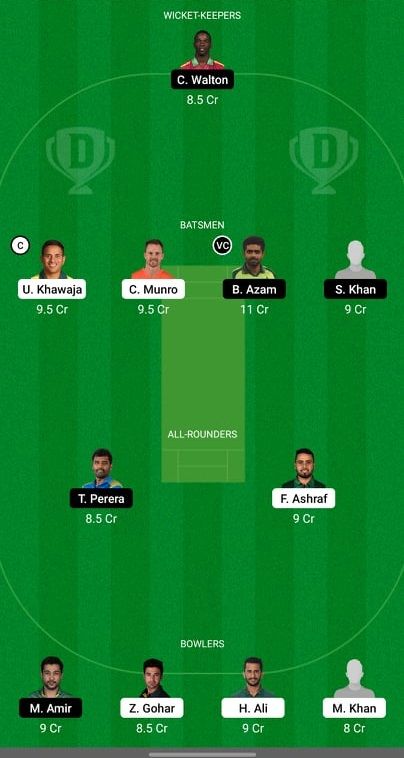