Colin Munro is fresh from scoring an unbeaten 36-ball 90 in the United’s last match.

Islamabad United, on Friday, June 11, was on top of their game in the 2021 edition of the PSL. The team, led by Shadab Khan, defeated the Quetta Gladiators by 10 wickets with 10 overs to spare.

Colin Munro’s stupendous 36-ball 90 took the United over the finishing line pretty comfortably. Their next game is against the Lahore Qalandars and another win will take them to the top of the points table.

In their previous meeting a couple of days back, the Qalandars won off the last ball. Sohail Akhtar and Co have won five out of their six matches and have looked in ominous touch.

The pitch in Abu Dhabi has been a tad on the slower side, and the spinners have gotten a fair amount of assistance. The batters have also made hay as the United showed on Friday.

Barring the last game, the chasing teams have found it tricky, and hence, batting first should be the way forward. The conditions will be sunny with the temperature around 38 degrees Celsius.

Playing combination for ISL vs LAH

Fakhar Zaman scored 189 runs from four games in the first leg of PSL 2021. However, in Abu Dhabi, he has only managed scores of one and nine, getting out early in the innings on both instances. Overall, he has 199 runs from six games at an average of 39.80. If he gets going in the mandatory powerplay, the United could end up chasing leather from the word go.

Probable best bowler of the match

Rashid Khan, without much of a doubt, has been the standout batter for the Qalandars in the tournament. In four games, the leg-spinner has picked up seven wickets at a stupendous economy rate of 4.56. In the second leg of PSL 2021, he has figures of 8-1-29-6 at an economy rate of 3.62. Not to forget that he can score handy runs lower down the batting order. 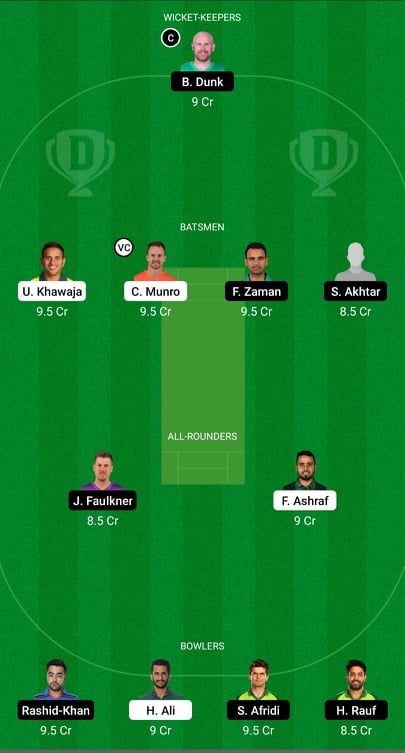