Punjab Kings (PBKS) vs Kolkata Knight Riders (KKR) Dream11 Prediction, Fantasy Cricket Tips, Playing XI, Pitch Report, Dream11 Team, Injury Update of VIVO IPL 2021. Kolkata Knight Riders are on a 4-match losing streak and will be hoping to end this streak as early as possible before it’s too late for them in this tournament.

The twenty-first match of VIVO IPL 2021 will be played on the 26th of April at Narendra Modi Stadium, Ahmedabad (formerly known as Motera) between Punjab Kings (PBKS) and Kolkata Knight Riders (KKR).

Punjab Kings is positioned at 5th place on the points table with 2 out of 5 victories and has made a comeback with a win in the last game after three consecutive losses. In their last game against Mumbai Indians (MI), after winning the toss skipper KL Rahul decided to bowl first. The bowlers of the Punjab Kings didn’t disappoint their captain and restricted the Mumbai Indians to a below-par total of 131 runs.

The comeback man Ravi Bishnoi showed his form in the first game itself and trapped two batsmen in his web. Mohammad Shami also picked a couple of wickets while Deepak Hooda and Arshdeep Singh bagged one wicket each to their name. While chasing this total, the team registered a comfortable win by losing only one wicket.

KL Rahul scored 60 runs off 52 deliveries while Chris Gayle scored 43 runs off 35 deliveries. Mayank Agarwal also contributed 25 runs to the winning cause. The team must have gained some confidence and will be eyeing another victory to strengthen their position on the points table.

Talking about Kolkata Knight Riders (KKR), the team is in great trouble and is positioned at the bottom of the table with only one victory out of 5 games. In their last game against Rajasthan Royals (RR), the team was invited to bat first after losing the toss. The batting of this team failed, yet again, to leave an impact and was decimated to a low total of 133 runs.

Shubman Gill, in the top-order, failed to capitalize on the start once again and got runout, unfortunately. Nitish Rana and Rahul Tripathi got decent starts but were not able to convert into a huge knock. In the middle-order, Eoin Morgan also got runout in an unlucky fashion while Andre Russell departed for just 9 runs.

Dinesh Karthik struggled in the middle-order but scored crucial 25 runs and led the team to a total of 133 runs. While defending this total, Varun Chakravarthy looked impressive with the ball and picked two wickets. Prasidh Krishna and Shivam Mavi picked one wicket each but failed to save the team from a defeat. Things are not going right for this squad and they are committing way too many mistakes, be it in fielding, batting, or bowling. The team is desperate to reap a win before it gets too late.

Out of a total of 27 games between the two teams, Punjab won only 9 games while Kolkata won the remaining 18 games.

The temperature will be in the high 30s with clear skies. There are no chances of precipitation and humidity will be around 14%.

In the past T20Is between India and England, a red soil wicket was prepared at this venue and thus the pitch is likely to help the fast bowlers with a decent number of opportunities for batters as well.

The average first innings score is 174 runs at this venue.

The chasing teams have won 50% of the matches here.

No new updates are there regarding injury or availability from any of the two camps. Will be added when there is an update.

KL Rahul is currently the second-highest run-scorer in this season of VIVO IPL and has scored 221 runs in 5 innings at an average of 55.25. He is a safe pick for multiplier choice for this match.

Mayank Agarwal is also in good touch with the bat and has scored 130 runs by far this season. He can be a trump pick in the team and can also be considered as an option for multiplier’s choice.

Ravi Bishnoi is back in the squad of Punjab Kings and picked two wickets in the first game itself. He is a consistent performer with the ball and is expected to take multiple wickets again on this surface.

Nitish Rana is a vital player as an opener for his team and has been consistent with the bat by far, he has scored 186 runs in 5 innings he played in this season.

Andre Russell has performed decently with both bat and ball and has scored 108 runs apart from picking 7 wickets so far in this season. He is a game-changer so it’s risky to miss him out from the team, in fact, he can be tried as a pick for multiplier’s options.

Rahul Tripathi has played some brief but effective innings by far in the season and must be eyeing to get a big knock to his name. He has scored 127 runs till now in 5 innings. 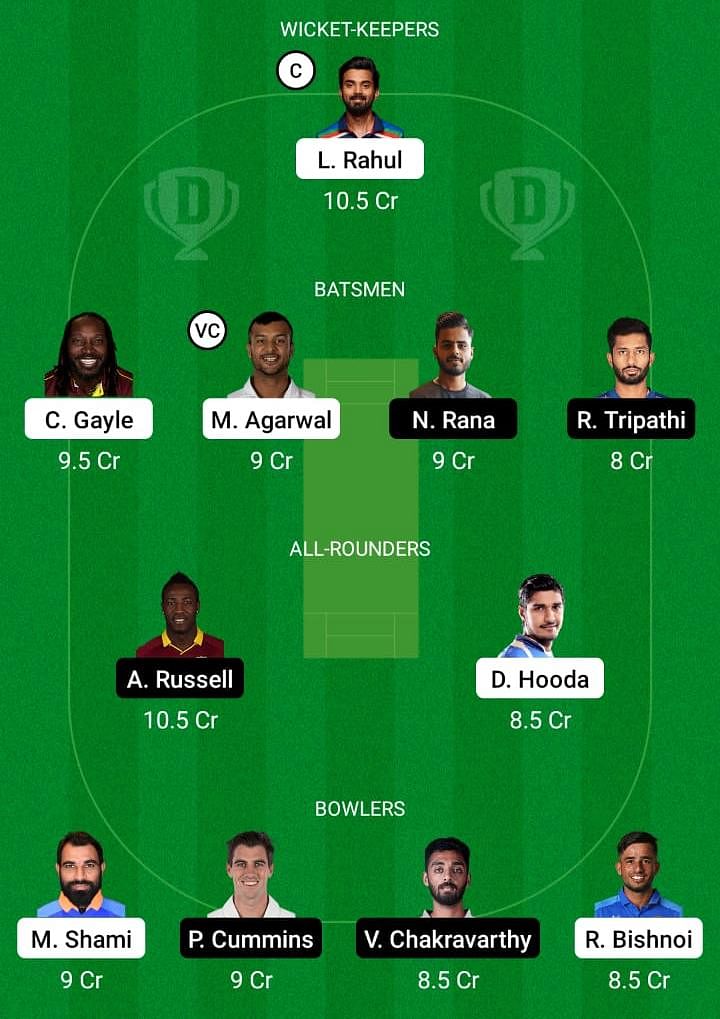 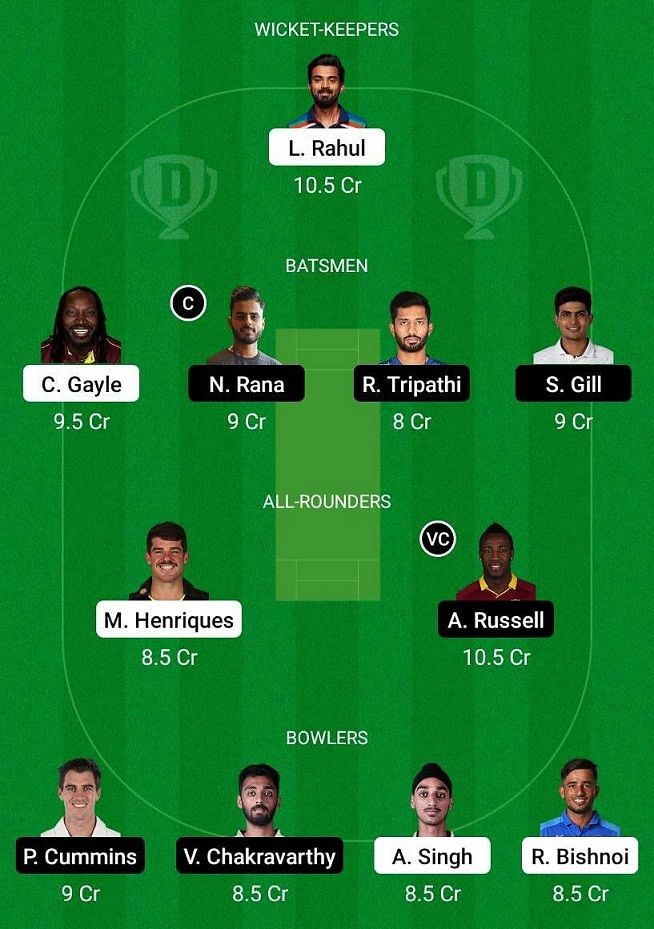 Dinesh Karthik can be picked in one of the teams by replacing one of the batsmen or all-rounders. The recommended combination for this game is 1-4-2-4.

Punjab Kings are the probable winners.