The 29th match of VIVO IPL 2021 will be played on 2nd May at Narendra Modi Stadium, Ahmedabad (formerly known as Motera) between Punjab Kings (PBKS) and Delhi Capitals (DC).

The game is scheduled to start at 07:30 PM IST and the live streaming can be seen on Star Sports network as well as Hotstar while the live scores and updates can be tracked on the CricketAddictor website.

Punjab Kings is currently positioned at 5th place on the points table with 3 victories out of 7 games. The team won their previous game against Royal Challengers Bangalore (RCB)/and must be looking to continue their good form. In the last game against Royal Challengers Bangalore, the team was invited to bat first but the start of the team was not good as the new opener Prabhsimran Singh departed cheaply.

After this, the universe boss Chris Gayle came in to bat and played an entertaining knock of 46 runs off just 24 deliveries, including 6 fours and 2 sixes. On the other end, skipper KL Rahul took the charge till the very end and scored an unbeaten 91 runs off 57 deliveries. Harpreet Brar, the local youngster, also played a cameo inning of brief but important 25 runs and led the team to 179 runs.

While defending this total, the bowlers bowled extremely well and decimated the strong batting lineup of Bangalore to 145 runs, and registered a win by 34 runs. The newcomer Harpreet Brar picked 3 important wickets and became the Player of the Match for his all-round performance.

Apart from this, Ravi Bishnoi picked 2 wickets while Chris Jordan, Riley Meredith, and Mohammad Shami picked one wicket each. The team will try to carry forward their momentum and get another win for them.

Talking about Delhi Capitals, this team is currently at 2nd place on the points table with 5 wins in the 7 games they have played so far. In their last game against Kolkata Knight Riders (KKR), the team registered an easy victory with the heroics of the batters. The skipper Rishabh Pant decided to bowl first after winning the toss and the opposition posted a total of 154 runs.

Axar Patel and Lalit Yadav picked two wickets each while Avesh Khan and Marcus Stoinis grabbed one wicket each. While chasing this total, the team registered a convincing victory with the help of 46 runs from their experienced campaigner Shikhar Dhawan and an entertaining knock of 82 runs off just 41 deliveries from Prithvi Shaw, including 11 fours and 3 sixes.

The team is in promising touch, both batters and bowlers are doing well. The biggest positive for this team till now are their openers who have performed consistently and in the bowling department, pacer Avesh Khan has got the attention of the spectators with his consistent wicket-taking deliveries.

Out of a total of 27 encounters between the two teams, Punjab has won 15 games while Delhi has won 12 games.

The temperature will be near 40-degree Celsius. The chances of precipitation are low and an uninterrupted game is on the cards.

The pitch is helpful for both batsmen and bowlers but the dew factor comes into play in the second innings of the game and bowling becomes a bit difficult.

The average first innings score is 170 runs at this venue.

The chasing teams have won 53.8% of the games at this venue.

Mayank Agarwal was hit during the game against Kolkata and was rested during the last game as reported by skipper KL Rahul. He may make a comeback in the squad in this game.

Riley Meredith got hit by a ball during the last over of the previous match and was taken off-field immediately. An update on his injury is still awaited.

KL Rahul has been phenomenal and consistent with the bat till now and is currently the orange cap holder with 331 runs in 7 innings at an average of 66.20. He is one of the top picks for captaincy here.

Chris Gayle has scored 165 runs in 7 innings by far but looked in reasonable touch from the past few games and must be looking to perform as per the expectations once again.

Ravi Bishnoi has picked 4 wickets in 3 games till now but is capable of picking multiple wickets for his team and can be a trump pick here.

Prithvi Shaw is batting explosively and has scored 269 runs in 7 innings. He also played a crucial knock in the last game against Kolkata Knight Riders.

Shikhar Dhawan has scored 311 runs in 7 innings by far and is the second highest run-getter in the tournament currently. He will be a safe pick for multiplier choice.

Avesh Khan is the leading wicket-taker for his team with 13 wickets till now. He is also currently the second-highest wicket-taker in the tournament. 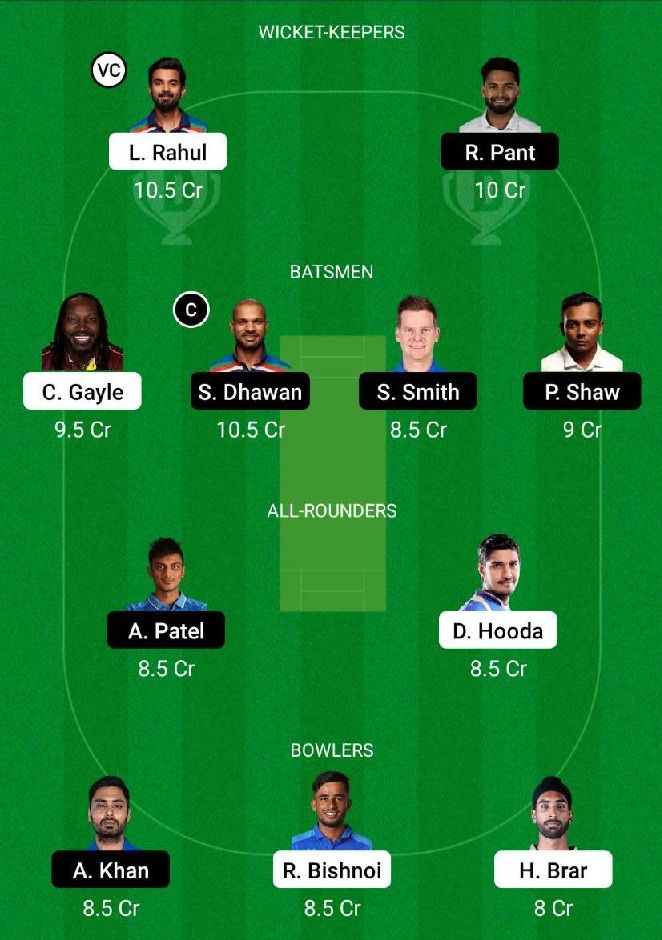 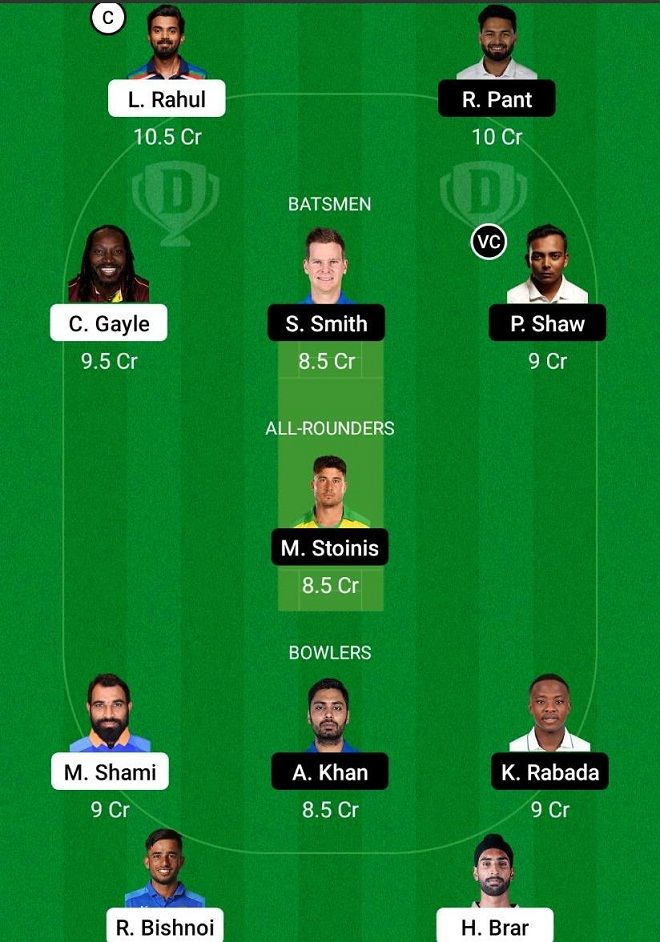