The ninth match of VIVO IPL 2021 will be played on the 17th of April at M.A. Chidambaram Stadium (Chepauk), Chennai between Mumbai Indians and Sunrisers Hyderabad.

Mumbai Indians (MI) have played two matches so far in this season of VIVO IPL. After losing the first match to Royal Challengers Bangalore (RCB), this team made a strong comeback by defeating Kolkata Knight Riders, defending a low total of 142 runs, credits to the stunning bowling performance from their leg-spinner Rahul Chahar.

He pulled out a 4/27 performance and won the Player of the Match award for his game-changing spell. Before this, when invited to bat first, Mumbai Indians lost its opener, Quinton de Kock, cheaply. Captain Rohit Sharma played a well-balanced inning of 43 runs off 32 deliveries. Surya Kumar Yadav continued his good form and smashed a half-century to help the team reach a respectable total. Ishan Kishan failed to make a big impact in the last game.

Kieron Pollard and Hardik Pandya failed to deliver with the bat yet again which resulted in a below-par total for the side. The team management must be looking up to their finishers to perform as per the expectations in the upcoming games. Trent Boult, too, performed well and picked 2 crucial wickets in the last over of the game.

The playing XI is likely to remain unchanged as they would not like to tinker with the winning combination.

Talking about Sunrisers Hyderabad, the team has lost both of its two matches sp far and will try to make a comeback in the tournament before it becomes too late for them. The major concern for this team is the lack of power hitters in the middle-order and that has been the very reason they failed to chase in both games.

In their second game of the season against Royal Challengers Bangalore, Sunrisers decided to bowl first after winning the toss. The bowlers of the team performed well and restricted the strong batting side of Royal Challengers Bangalore to a total of 149. All-rounder Jason Holder picked 3 crucial wickets, along with 2 wickets of Rashid Khan. Bhuvneshwar Kumar, Shahbaz Nadeem, and T. Natarajan got a wicket each to their names. While chasing a low total of 150 runs, opener Wriddhiman Saha got out cheaply once again.

Captain David Warner returned back in form and scored 54 runs off 37 deliveries but the middle-order of Sunrisers Hyderabad collapsed after David Warner departed. Manish Pandey played a slow inning of 38 runs off 39 deliveries and failed to lead the team to victory. The team management will try to improve in the concerned areas and make suitable changes in the playing XI.

In the total of 16 clashes between Sunrisers Hyderabad (SRH and Mumbai Indians (MI), both the teams have won 8 games each and both will try to take a lead by winning this game.

There are minimal chances of precipitation and skies are likely to be clear. The temperature will lie between 25-30 degree Celsius.

The pitch has helped spinners in the latter half of the game and matches have been low scoring in this VIVO IPL edition at Chepauk ground. Another low-scoring match is expected, with dominance from the spinners.

Rohit Sharma has been reported to be fit for the game after bending the ankle while bowling in the second game.

Rohit Sharma is in good form and looked in positive touch in the game against Kolkata Knight Riders by scoring 43 runs off 32 deliveries. He will be eyeing for a good score once again.

Surya Kumar Yadav scored an explosive 56 runs off 36 deliveries in the last game against Kolkata Knight Riders and is continuing his golden run from international cricket into the VIVO IPL as well.

Ishan Kishan has failed to impress with the bat by far in the two innings he has played in this VIVO IPL and must be looking to get a promising knock in this game.

Rashid Khan is in good form and has picked 2 wickets each in the two games he played in this VIVO IPL so far. He has picked 8 wickets in the 8 matches he has played against Mumbai Indians so far.

Jonny Bairstow scored a half-century in the first game while departed for 12 in the second game. He must be looking to get a big inning in this game once again. 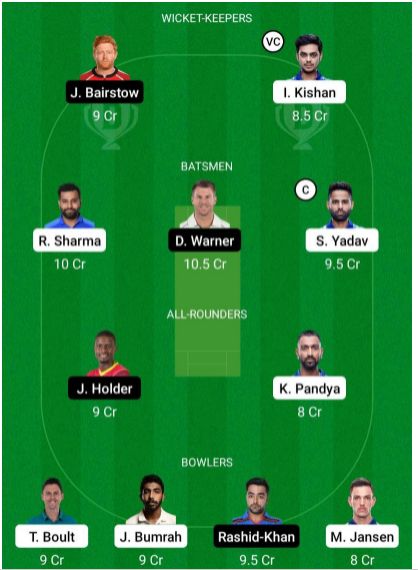 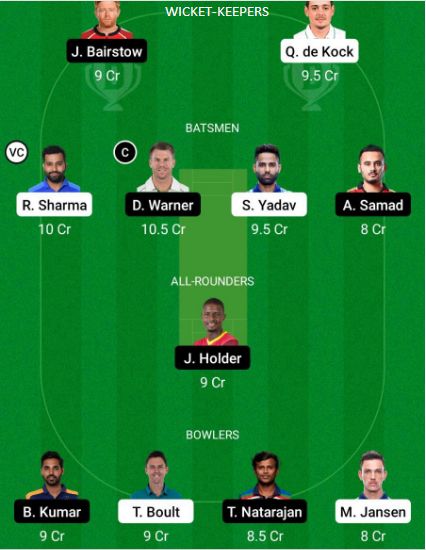 In the second team, Jason Holder can be replaced by Hardik Pandya. Quinton de Kock can also be considered as a multiplier pick for this game. The best-suggested combination for this game is 2-4-1-4.

Mumbai Indians are the probable winners for this game.

IPL 2021: Ricky Ponting reveals the reason why Ishant Sharma has not played for the Delhi Capitals thus far