LKK vs SS Dream11 Prediction, Fantasy Cricket Tips, Playing XI, Pitch Report, Dream11 Team, Injury Update of Shriram TNPL T20 match between Lyca Kovai Kings and Salem Spartans. They will play against each other for the first time in this season of the Shriram TNPL T20.

The 1st match of the Shriram TNPL T20 will see Lyca Kovai Kings facing off against Salem Spartans on 19th July at the MA Chidambaram Stadium.

The fifth edition of the TNPL T20 will start on 19th July and the final will be played on 15th August. All the matches of this season of the Shriram TNPL T20 will take place at the MA Chidambaram Stadium, Chennai.

Lyca Kovai Kings and Salem Spartans will inaugurate this season’s tournament as they take on each other in the opening game.

Lyca Kovai Kings played seven matches in the 2019 edition of the TNPL T20 where they won four matches while Salem Spartans won two of their seven games.

Both the teams have played two matches against each other in the last few years where both Lyca Kovai Kings and Salem Spartans won one game each.

The temperature is expected to hover around 29°C on the matchday with 72 % humidity and 13 km/hr wind speed. There are 39 % chances of precipitation during the game.

The MA Chidambaram Stadium provides a neutral wicket where both the departments are expected to receive a decent amount of help from the surface. Spinners can come lethal in the middle overs while pacers will be in the game throughout.

The average first inning score on this wicket is 151.

The team batting second doesn’t enjoy good records here. They have a winning percentage of 40 on this track.

Shahrukh Khan is a right-handed batsman and right-arm off-break bowler from Lyca Kovai Kings who leads the team. He smashed 197 runs in the last season of the TNPL T20.

Ganga Sridhar Raju is a left-handed batsman and right-arm off-break bowler from Lyca Kovai Kings. He smacked 229 runs in the last season of the TNPL T20.

Vijay Shankar is a right-handed batsman and right-arm medium pace bowler from Salem Spartans. He has scored 101 runs and took 5 wickets in his 9 matches T20I career so far.

Murugan Ashwin is a right-handed batsman from Salem Spartans who bowls right-arm leg-break with the ball. He picked up 8 wickets in the last season of the TNPL T20.

Suggested Playing XI No.1 for LKK vs SS Dream11 Team: 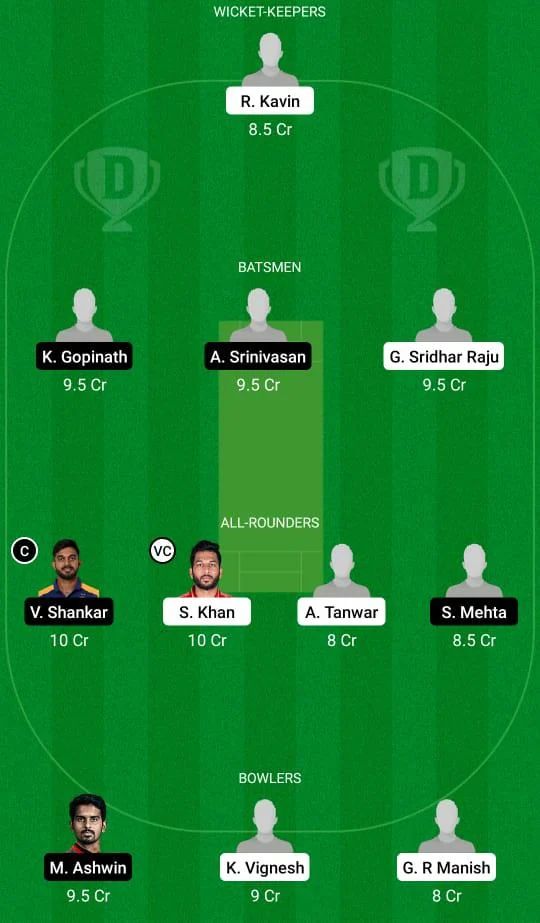 Suggested Playing XI No.2 for LKK vs SS Dream11 Team: 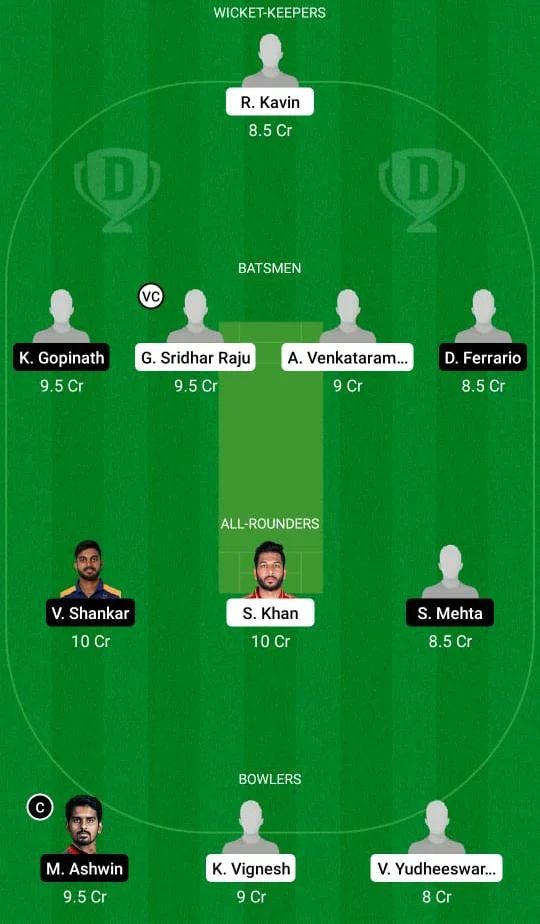 Vijay Kumar will be a safe captaincy choice for the small leagues considering the international cricket experience that he possesses. Ashwin Venkatraman and Daryl Ferrario are the punt-picks here. The best-suggested combination for this game is 1-3-4-3.

Salem Spartans is expected to win this match considering the balance in their squad.

Virat Kohli is the most passionate cricketer I’ve come across: Tymal Mills [Interview]