The eleventh match of VIVO Indian Premier League (IPL) 2021 is set to be played on 18th April between Delhi Capitals and Punjab Kings at Wankhede Stadium, Mumbai.

The eleventh game of VIVO IPL 2021 and the second game of the double-header on Sunday will be played between Delhi Capitals (DC) and Punjab Kings (PBKS). Both the teams have played two games in this season by far out of which both of them have won one of their games while lost the other.

Delhi Capitals started its VIVO IPL 2021 campaign on a positive note and defeated the Chennai Super Kings  (CSK) convincingly in the first game. While in the last game against Rajasthan Royals, Delhi Capitals failed to defend a below-par total in a last-over thriller. In the last game, after being invited to bat first, Delhi Capitals posted a total of 147 runs on the board.

Openers Shikhar Dhawan and Prithvi Shaw failed to get a two-digit score. Experienced batsman Ajinkya Rahane also departed for just 8 runs while all-rounder Marcus Stoinis got out for a duck. Despite the lack of support from the other end, skipper Rishabh Pant played a cracking inning of 51 runs off 32 deliveries and became a victim of run-out in an unfortunate way.

The notable bowling performances were 3 wickets from Avesh Khan and two wickets each from Kagiso Rabada and Chris Woakes. The Delhi Capitals must be expecting for contribution from top-order batsmen in this match.

Talking about Punjab Kings, this team won its first game against Rajasthan Royals but lost its second game against Chennai Super Kings due to the collapse of the top batting order. In the second game, after being invited to bat first, the opener Mayank Agarwal once again failed to deliver and departed for a duck in the very first over.

Captain KL Rahul was unlucky and got run out in an unfortunate manner. In the middle-order, Deepak Hooda and Chris Gayle scored 10 runs each while Nicholas Pooran also got out on a duck to make the situations even worse for the side. With the help of 47 runs off 36 deliveries from youngster Shahrukh Khan, the team reached a small total of 106 runs.

In the bowling department, Mohammad Shami picked two wickets while Arshdeep Singh and Murugan Ashwin got one wicket each to their names but failed to defend this low total as expected. The team management will expect the top and middle order to deliver with the bat in this crucial contest.

Delhi Capitals and Punjab Kings have faced each other on 26 occasions out of which 11 were won by Delhi while Punjab got 15 games to their name.

The temperature will lie between 28-34 degree Celsius. There are very low chances of rainfall and humidity will be around 60%.

The earlier matches at Wankhede supported the batsmen while the recent games have been low scoring ones as the pitch has been changed. Thus an evenly balanced contest between bat and ball is expected.

The chasing team has won 52.7% of VIVO IPL games at Wankhede.

Anrich Nortje is finally out of quarantine and will be available for selection in this match.

Ishant Sharma will be unavailable for selection owing to an injury.

Shikhar Dhawan is in good form but failed to score in the second game against Rajasthan and must be looking to make a comeback in this game. He has 94 runs to his tally in the two games he has played so far.

Prithvi Shaw looked in terrific touch in the first game and can make a huge impact once again in this match. He scored 72 off 38 balls in the game against Chennai Super Kings to help his side with an excellent start.

Rishabh Pant scored a terrific half-century in the previous encounter and will look to make a healthy contribution with the bat once again in this match. He can also stack some useful points with his wicketkeeping skills.

KL Rahul played a brilliant knock in the first game against Rajasthan Royals (91 off 50 deliveries) and will look to replicate a similar performance in this match once again. He is known for his attacking batting skills and can generate few handy points with the gloves as well.

Chris Gayle hasn’t come in the best of his form yet and the team will be counting on him to help them with a flying start at the top in this match once again. He has the potential to pile up mighty runs with the bat if he gets going early on.

Mayank Agarwal has looked completely out of touch so far but a player of his calibre can make a comeback at any stage of the tournament. He has fantastic domestic stats to his name and will look to capitalize on the start in this match. 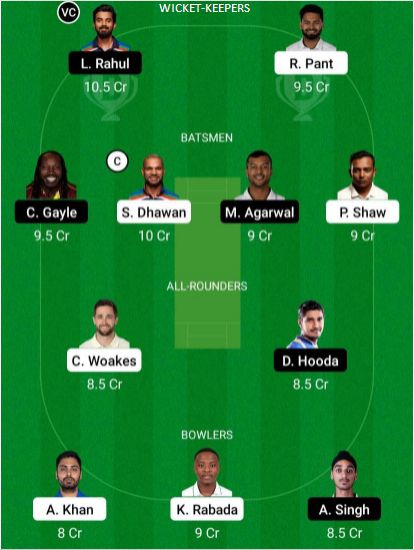 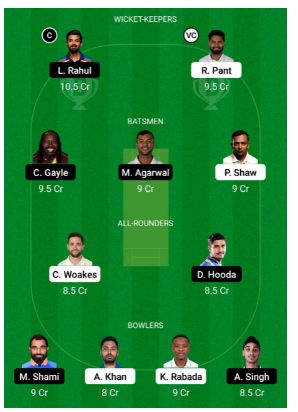 The best-suggested combination for this match is 2-3-2-4. Batsmen are the top multiplier suggestions for this encounter. Deepak Hooda will be the punt pick here while Kagiso Rabada will make a healthy vice-captaincy choice considering his dominance in this format.

Delhi Capitals are expected to win this match.