Carlos Brathwaite is under isolation and he is doubtful for this match.

Jamaica Tallawahs will take on St Lucia Kings in the 3rd Match of the CPL 2021 on Friday. Jamaica Tallawahs had lost to Trinbago Knight Riders in the semi-final last year by 9 wickets. They have got capable players with the likes of Andre Russell, Rovman Powell, and Chris Green and they will be confident of going big in this tournament.

St Lucia Kings, on the other hand, was beaten in the finals by Trinbago Knight Riders last year by 8 wickets. Skipper Faf du Plessis is expected to be fit for the first game, meanwhile, Tim David has replaced Matthew Wade in the squad.

The batters will get plenty of advantage from the surface whereas bowlers will find it really hard to control the run-flow. Batting 2nd is a good option at this venue.

Rovman Powell had a poor outing with the bat in the last edition, he just managed to score 106 runs in 10 innings at an average of 11.77. He is looking forward to a better tournament this time around.

Star player, Faf du Plessis is expected to play in this match. He was ruled out of the latter part of PSL and Hundred due to concussion. He had an excellent first leg of IPL where he has scored 320 runs in 7 matches at an average of 64.

Andre Russell is a must-pick for your fantasy teams on any given day. He is strongly built, no ground is big enough for him to clear. He has mustered 222 runs in 8 innings in the last edition of CPL and even picked up 3 wickets as well.

Rahkeem Cornwall has got good reach and can smack the ball out of the park. He had a good last edition where he has collected 182 runs in 10 matches at a strike rate of 141.08 and picked up 2 wickets as well.

Fidel Edwards has recently made a come-back into the West Indies T20 squad against Australia. 39-year-old seamer has scalped 9 wickets in the last edition at an economy of 7.66.

Kesrick Williams is pretty famous for his unique celebrations. He was the 2nd leading wicket-taker for St Lucia Kings last year where he picked up 13 wickets at an economy of 8.92.

Andre Fletcher is famous for his no-look six. He is not in the best of forms lately for West Indies. He has scored 211 runs in 11 innings in the last edition of CPL.

JAM vs SLK Must Picks for Dream11 Fantasy Cricket: 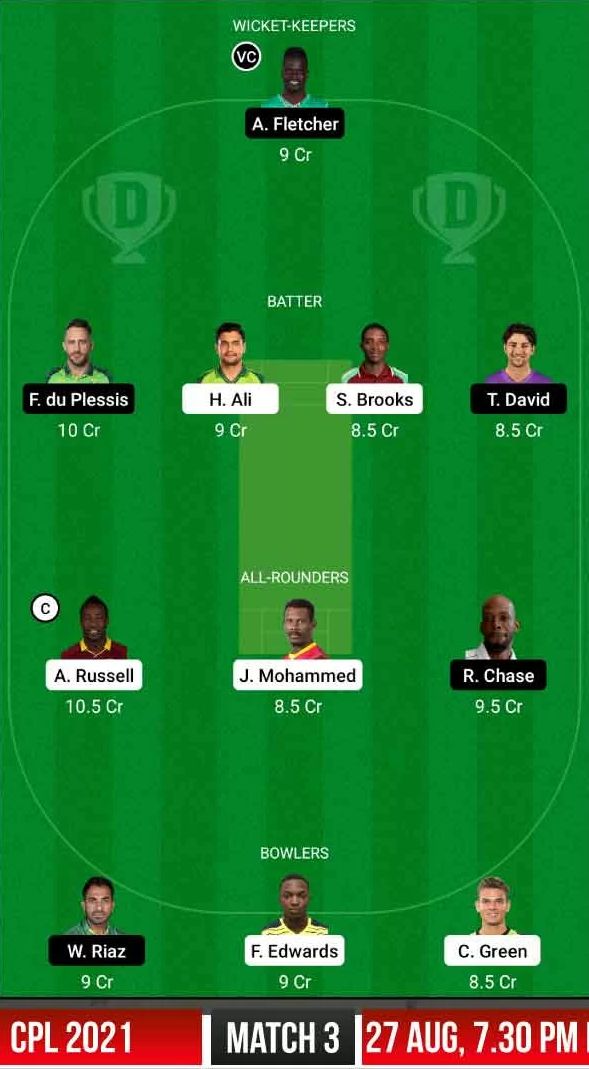 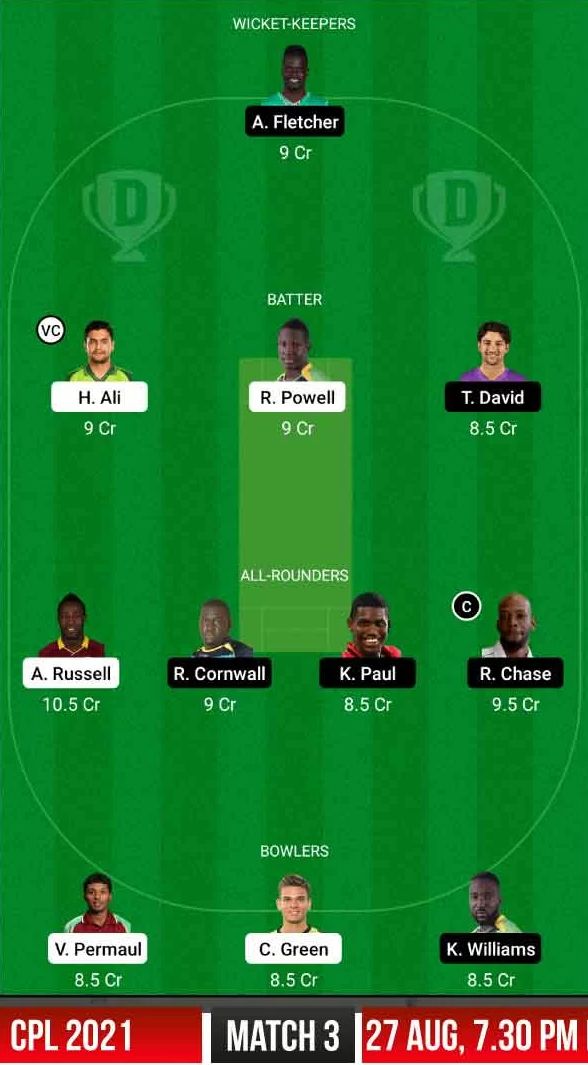 Chris Green was part of Guyana Amazon Warriors in the last edition where he scalped 9 wickets in 11 matches at an economy of 5.68.

Tim David is getting noticed all over the world for his exceptional performances in the English County. It’s worth a risk to pick him as your fantasy team skipper.

Chadwick Walton has scored only 24 runs in the last edition of CPL, hence it’s better to avoid him while making your fantasy teams.