Glenn Phillips has done well in the last game and is expected to repeat similar performances in this match as well.

After back-to-back defeats against St Kitts and Knight Riders in their first two matches, Barbados Royals got the better of the mighty Jamaica Tallawahs by 15 runs and registered their first win in this tournament. Glenn Phillips, who had a pretty ordinary first two games, stepped up and scored a vital half-century, while the bowlers did the rest to defend the target quite successfully.

Jamaica Tallawahs will be eager to seek revenge for their loss against Barbados Royals. They started this tournament with a massive 120-run victory against St Lucia Kings, but Andre Russell’s failure in the last match proved costly for them. As a result, they fell short of the target by 15 runs.

The wicket is getting slower and it requires immense power from the batters to go after the bowlers in the middle overs. Spinners are pretty handy on this type of surface. By looking at the recent results, anything over 160 is a defendable score on this wicket.

Glenn Phillips finally arrived at the big stage with a big score against Jamaica Tallawahs. He played sensibly for his 56* runs from 46 balls, which helped the Royals to get past the 160-run mark.

Haider Ali can play big shots, while he also has the ability to play according to the demand of the situation. In 2 matches in this tournament, he has scored 52 runs at a strike rate of 140.54.

Jason Holder is a decent pick for your fantasy teams. In 3 matches so far in this tournament, he has scored 25 runs and has also picked up 2 wickets.

Andre Russell was kept quiet by the Barbados Royals on Saturday. But the big Jamaican fired up in the first match against St Lucia Kings, where he scored a 14-ball 50*.

Mohammad Amir is back to his best and is picking up wickets at regular intervals. He has scalped 6 wickets in 3 matches so far in this tournament at an economy of 5.33, with the best figures of 3 for 21.

Migael Pretorius is the pick of the bowlers from Jamaica Tallawahs in this competition. In 2 matches,. he has already scalped 5 wickets, with the best figures of 4 for 32.

Chadwick Walton opens the batting for Jamaica. In 2 matches in this competition, he has scored 50 runs, with the highest score of 47. He is among the best in the business behind the wickets as well.

BR vs JAM Must Picks for Dream11 Fantasy Cricket: 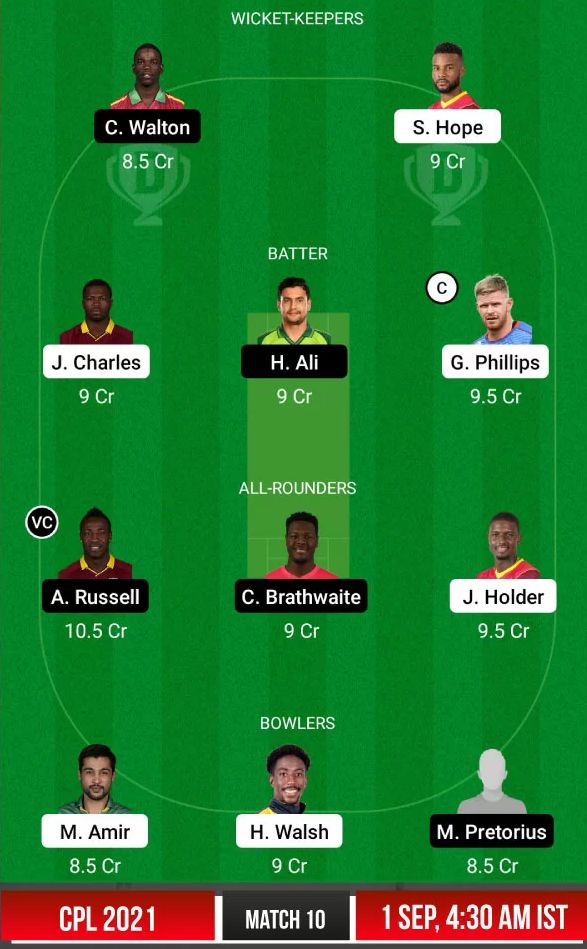 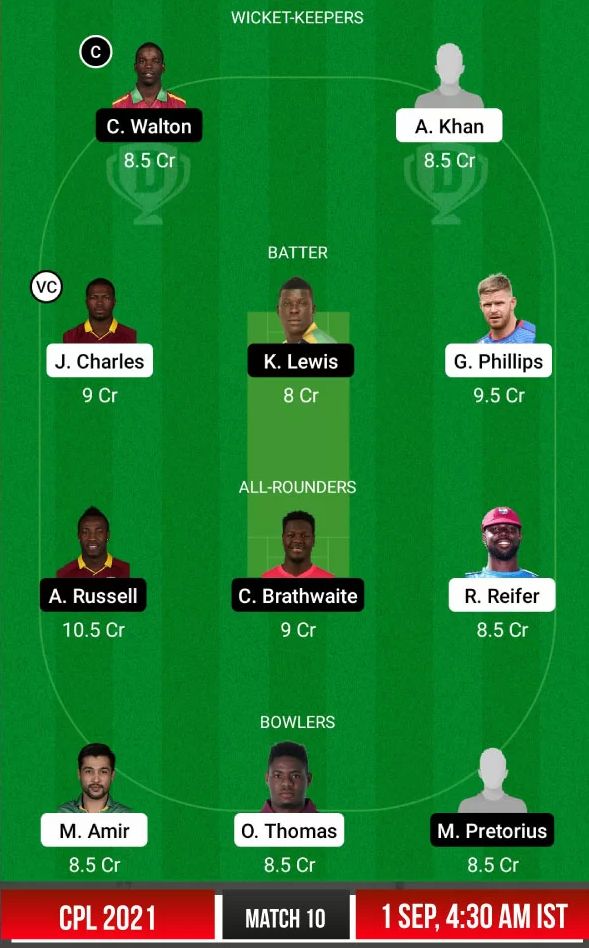 Shai Hope averages 23.66 with the bat in this tournament. You can take a risk and pick him as your fantasy team skipper.

Carlos Brathwaite hasn’t bowled a single over in this tournament, and hence it will be risky to pick him as the captain for your fantasy teams.

Kyle Mayers is currently out of touch with the bat. He has scored only 13 runs in 3 matches in this competition. Hence, it’s better to avoid him while making your fantasy teams.