Chris Gayle IPL: The Universe Boss has been the most popular overseas player in IPL history due to his flamboyant style of batting and carefree attitude. In the IPL 2013, Gayle created a record of scoring the highest individual score of 175 against Pune Warriors and since then has been the heartthrob of cricket fans. He played for Royal Challengers Bangalore from 2011 to 2018. Then, in 2019 he was picked by Punjab Kings and has performed well. In the last league match against Mumbai Indians, he stitched a good partnership with KL Rahul to help the team win their 2nd league match in IPL 2021.

Chris Gayle Dives and Direct hit in PBKS vs KKR

The Universe boss has been the talking point in the match between Punjab Kings and Kolkata Knight Riders. This time it’s not for his batting performance, but brilliant fielding effort. After failing to contribute with the bat, his fielding effort made sure the team gets the confidence to defend the low total of 124 on the board. In the 4th over of the KKR innings, Eoin Morgan chipped the ball into a short mid-wicket, where Gayle was fielding. As soon as Gayle saw the ball, he dived full length and direct hit the stumps to try dismissing Rahul Tripathi. But replay showed Tripathi was well inside the crease. 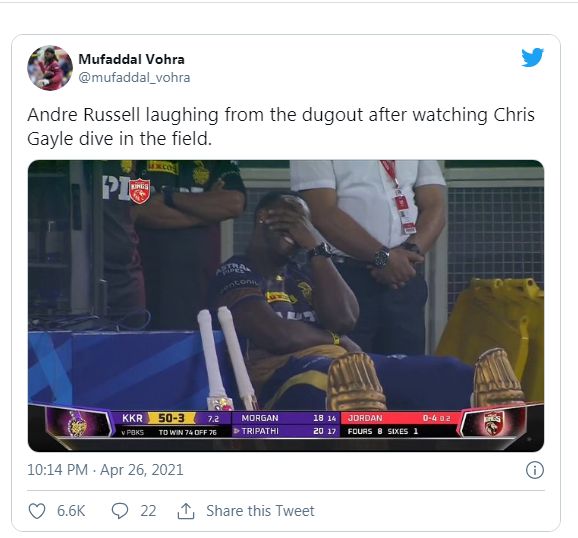 KKR did extremely good with the bowl today and they got a low score in front of them to chase. Punjab Kings made 123 on the board, with the help of some late finishing from Chris Jordan, who was playing his first game in this IPL.

Kolkata did not have a good start with the bat, Rana and Gill threw away their wickets cheaply. Narine got out on a catch taken very nicely by Bishnoi. Morgan and Tripathi accelerated the innings very well and they kept the run rate below run-a-ball. Morgan had not been able to score well in any of the previous games, but he kept the score in his mind in this game and played responsibly like a captain, and played till the end to win the 2nd league match for the team.